no cycling,  just 4 km together to get to the bus in Phnom Penh and from the bus to the ferry in Sihanoukville.

I tought it would be a wonderful morning. Getting up,  have some breakfast, the van would pick up my luggage, I would follow him to the bus station with my bicycle (it didn’t fit into the van,  which picks you up to get to the bus station) , get into the bus and get down to the beach of Cambodia.

It didn’t all went as planed. Till the pickup everything was all right. Then I was told to wait at the hostel,  as the van would go to another hostel to pick up more people and they would come back for me so that I could follow them. I waited and waited. Suddenly they passed by without breaking,  they just honked and waved to me. The chase through the city began. Arrived at the bus station I got my luggage back and searched for the bus. My luggage got stored in the bus and then my bicycle…​ no. I forgot to buy the ticket. Okay I will buy the ticket for the bicycle,  5$. They didn’t want to sell me a ticket for my bicycle,  they told me “no space”,  I had to take another bus one hour later. Luckily I saw the space in the luggage compartment of the bus and I knew that it would fit as it was the same type of bus I took some days ago. They kept telling me the same lie over and over, till I got really angry and shouted at them, that I know that there is space and I know what to do to get it in. Then suddenly they said okay and even let me jump over the queue at the ticket office,  as it was already 9:15 (the bus should have left at 9:00), but heyyy its cambodian time😂 My bicycle got a ticket too, took my front wheel off placed my bicycle in the bus,  my luggage (which they already took out again)  back in and went into the bus. I had to do everything by myself,  they didn’t even help me😂 I wasn’t the reason for the delay,  there were more people coming later than me!

The rest of the ride was normal,  they stopped at 12 o’clock at a restaurant with reasonable food and arrived with 2 hours of delay at Sihanoukville. From there I had to take the ferry to get to the island where Soraya and Andreas are staying. I had to wait for one hour on the ferry (departure time at 17:00). So I am chilling at a bar next to the beach. 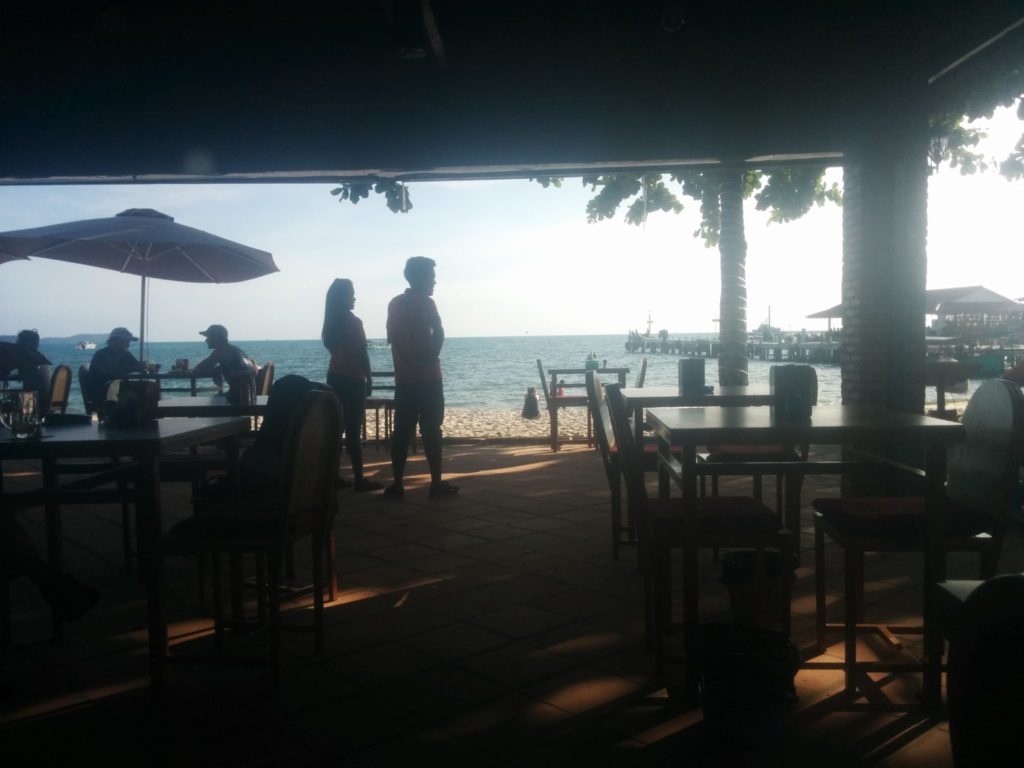 Tomorrow I will probably try to get back to mainland and start cycling again towards Vietnam 😀 Alternatively I would stay another day on the island,  I don’t know yet. I have to see when I am at the beach ⛱