I met up a last time with the girl from the day before and we had breakfast together and then I went on the road.

First I had to cross the river with a ferry outside of the city. Because I only had big bills left, the woman in the ticket box just waved me through. Sweet,  ferry for free😀 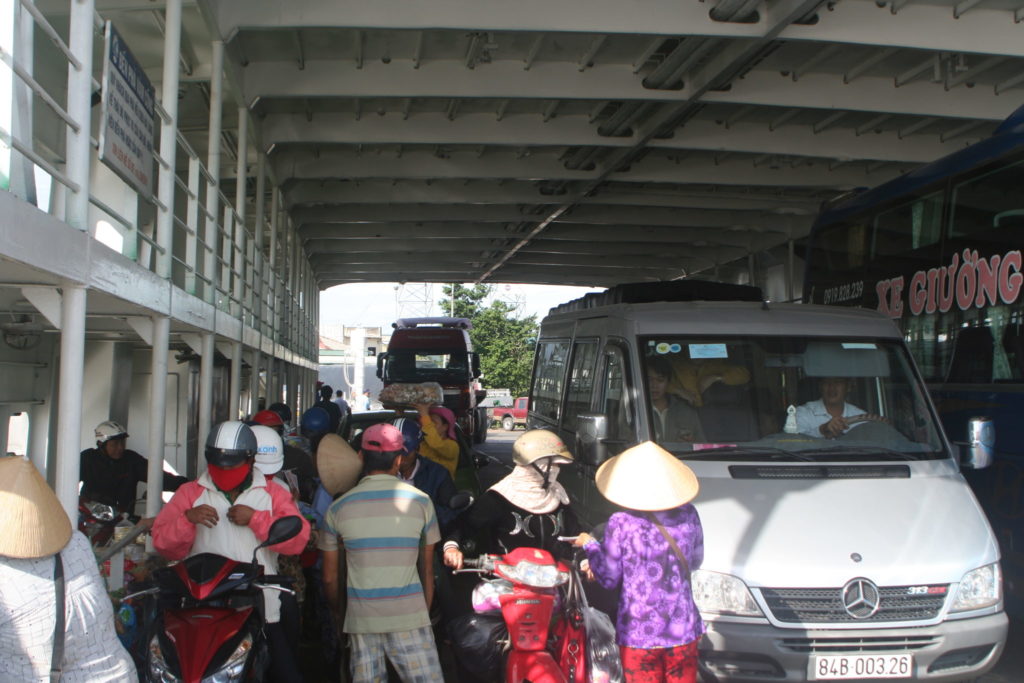 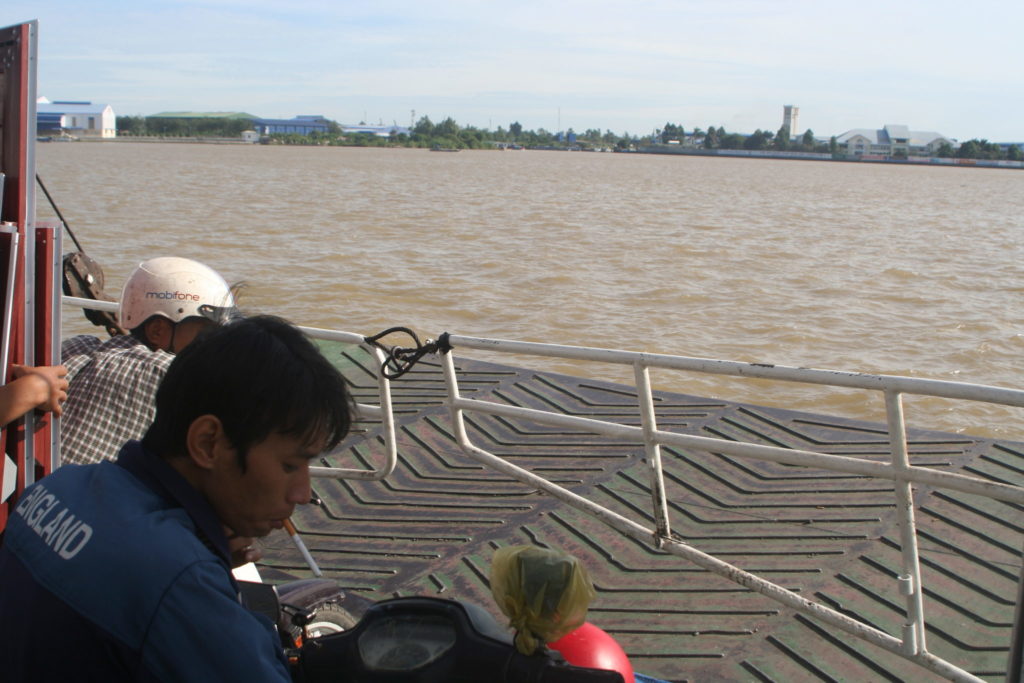 A new bridge is being build, which will probably replace the multiple ferries running simultaneously. 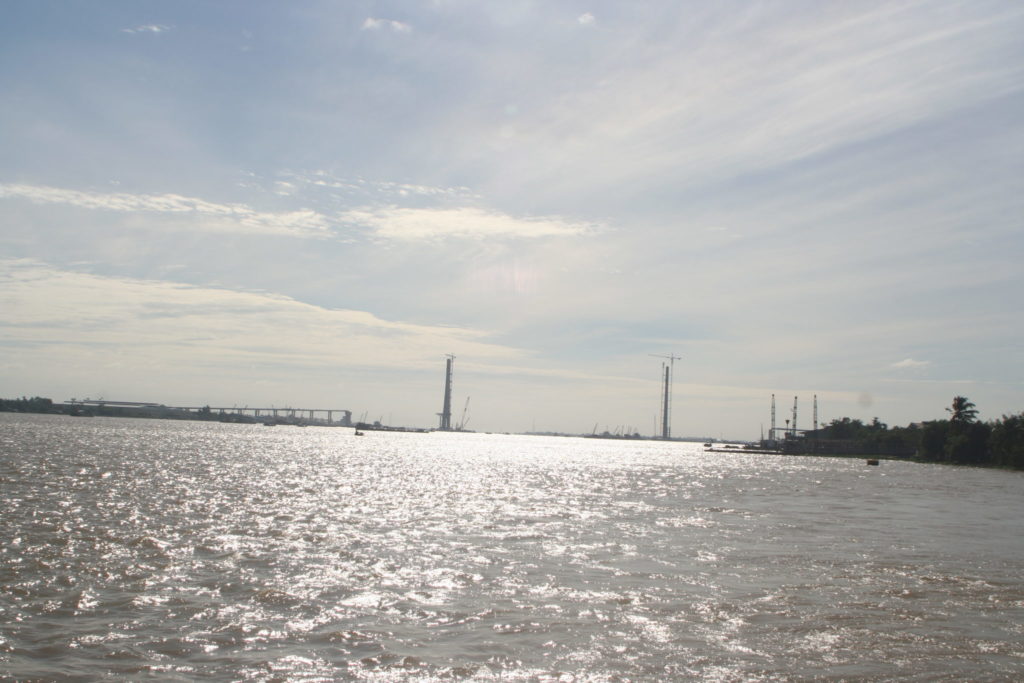 On the other side I had to stop for this sign,  I don’t know why it was there in front of a bridge😂 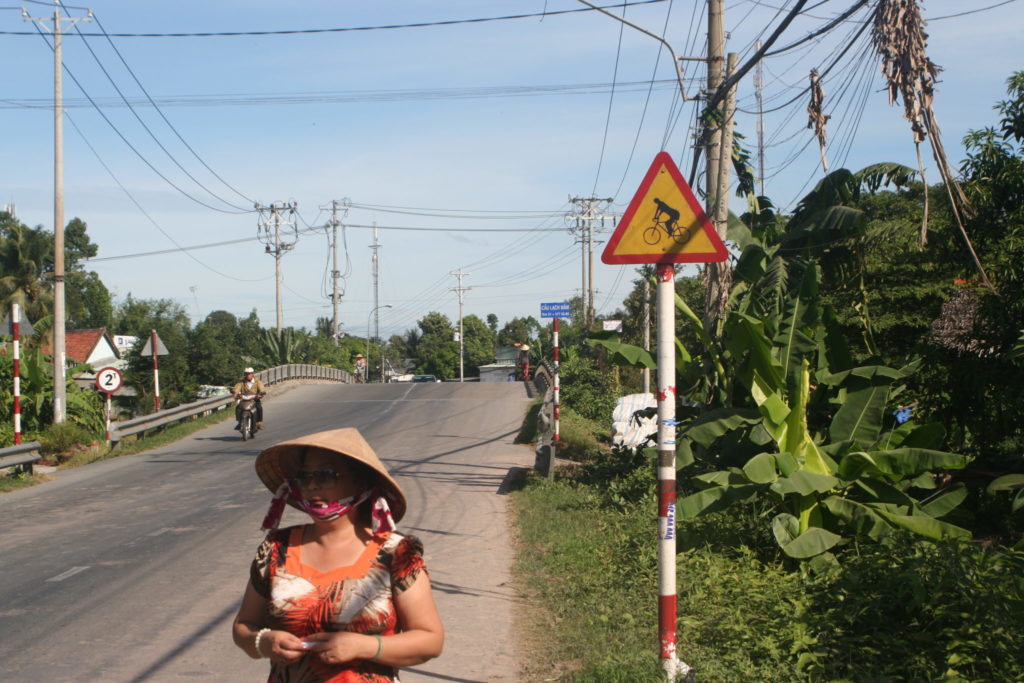 I continued my cycling until it happened. What I wrote now is how I thought shortly after it happened,  my thoughts changed later that day: My bicycle started to whabel around, I look at my wheels and knew there was a flat, so I stopped immediately,  as cycling with a flat tire will destroy it and you can’t repair it anymore. I took of the luggage, and carried my bicycle 20 meters to the next café vong (a place where you can buy drinks and there are hammocks,  which are vongs in Vietnamese,  everywhere) . People started to look strange at me,  because I was carrying my luggage and my bicycle😂 When I showed them that I had a flat,  they pointed to the place next to the café vong. I went there to look what it was and left the bicycle back,  it was a place which repairs tires. When I came back,  there was already one guy carrying my bicycle to that place (I was just gone for 10 seconds) 😂 He found the reason quickly,  a 1 cm long old rusty nail… Removed the nail,  fixed the whole in the tube,  fixed the hole in the tire, placed everything back and pumped up the tube 😀 And everything for just 10000 VND😀 no stress for me. How lucky I was to get the flat in front of that store. I could have fixed it myself,  I have all the tools on me,  but I would have been more frustrated. 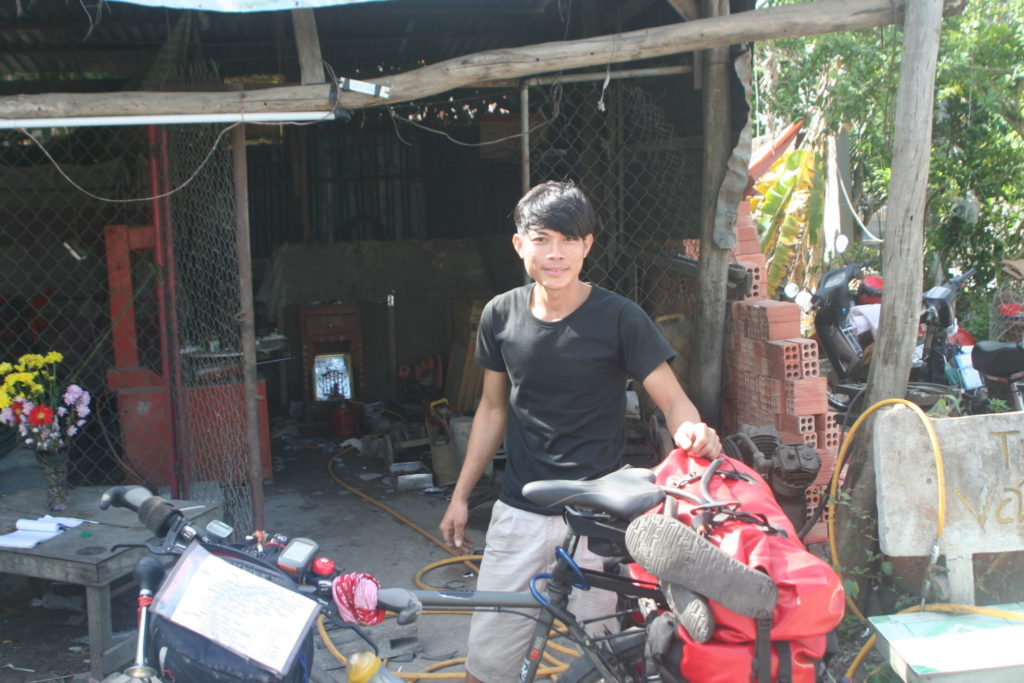 So these were my thoughts shortly after it happened when I stopped at another café vong to buy new water and rest. The guy in the picture was the one who “repaired”  the tube

I continued for the rest of the day,  just good road. 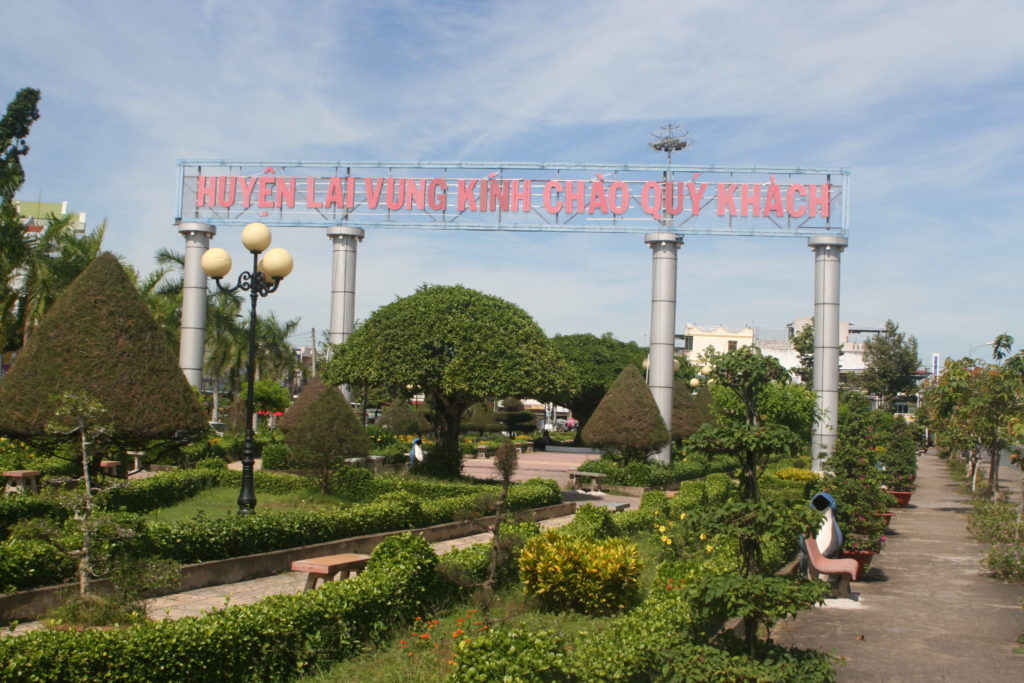 this kind of reminded me of another city 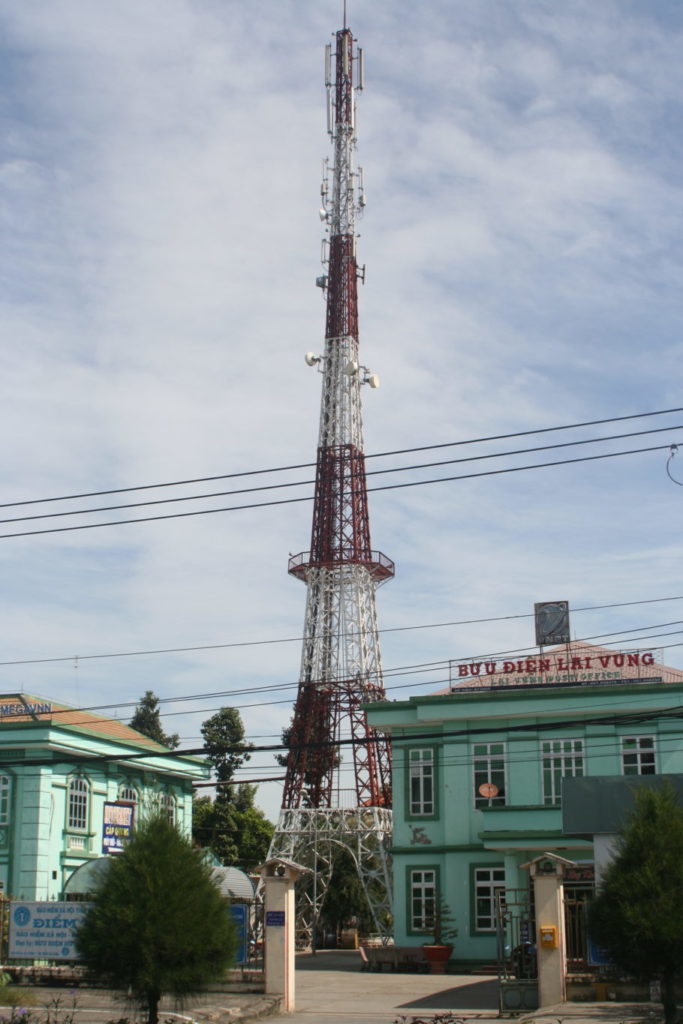 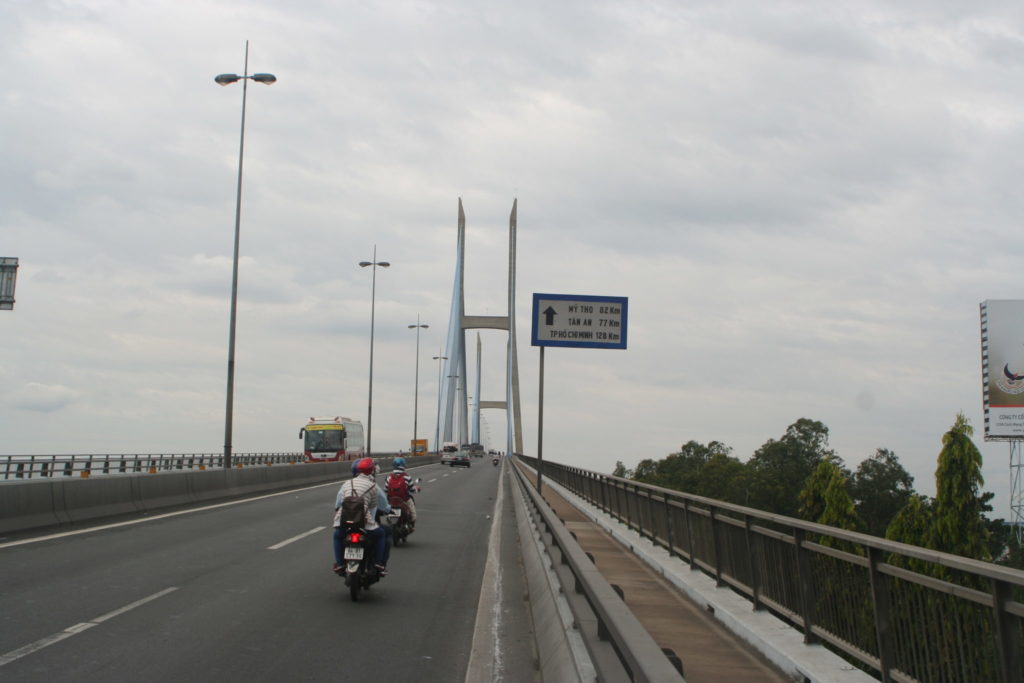 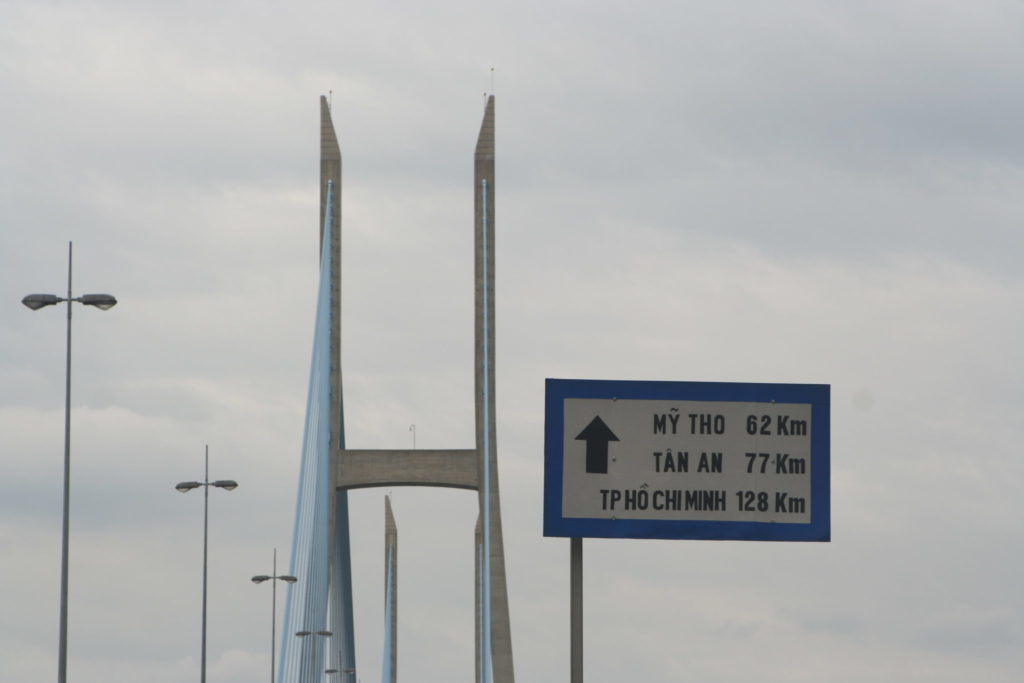 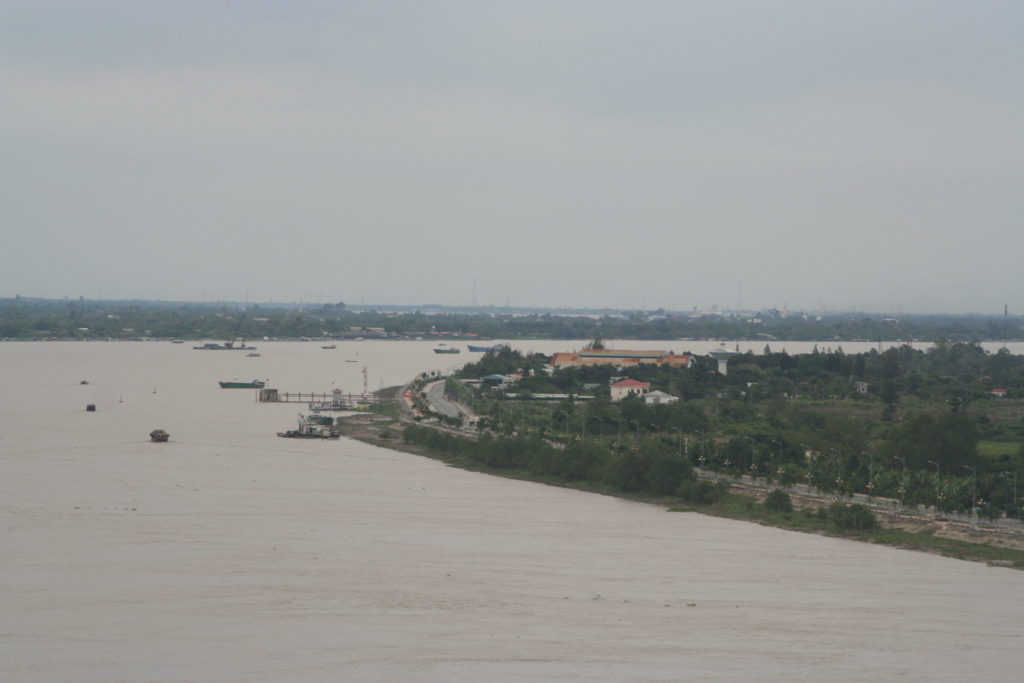 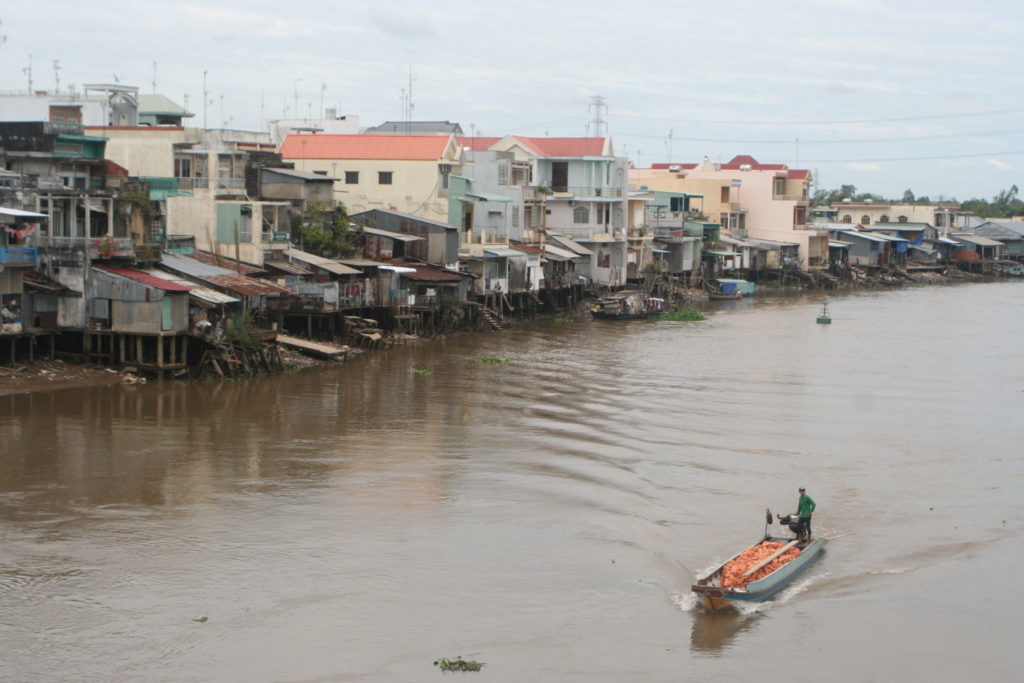 Until suddenly,  my bicycle started whabeling again. The back tire was flat again after 60 km. I took my pump out and filled the tire again,  it looked all right. After 5 km again flat. I went to a store with a compressor,  they filled up both of my tires. Which lasted another 10 km. I decided to check it. I was really pissed of. I stopped at a cafe vong (they are really everywhere here 😀) and tried to get my rear wheel out. Sadly it completely blocked and I freaked out a little bit more. The family of the cafe the helped me. Eventually we got it out,  a spring in the fixation of the wheel was blocking. I saw the patch of the repair action of the morning. The glue was eating up the patch… So the guy in the picture above was called an idiot by me. I just replaced the broken tube with a new one (my last one,  I have to buy new ones in Saigon) and pumped it up again. Luckily they had a stand pump and I didn’t have to pump it up with my little hand pump😀 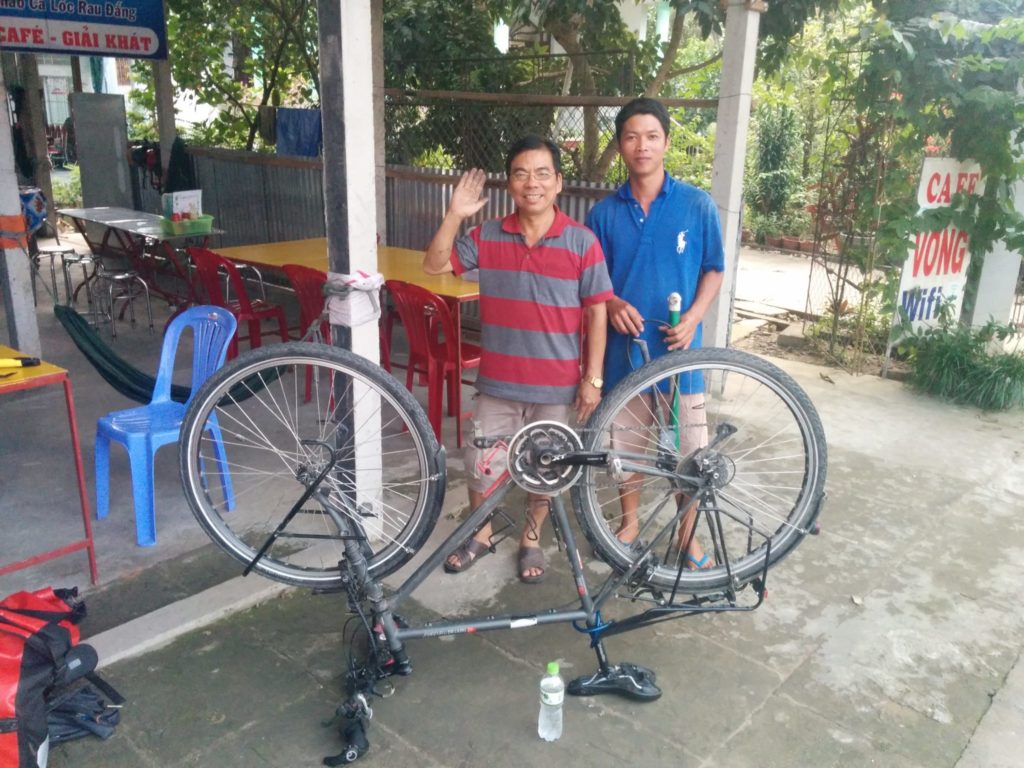 Shortly after that it got dark and I decided to find a place to sleep. I just needed to cycle for 11 km in the dark and asked around as nobody knew about the placed marked on my map. In “My Tho” I then found a really cheap and good hotel 😀

Tomorrow I will enter Saigon, only 70 km left till there. There some people I met at the border invited me in for new years eve and to stay for one night 😀