A little report on the breakfast: They kind of have just rice (not fried) with pork with that soup of the pork cooking and some chilli. Served with it,  free of charge is a whole can of tea. On the picture there is fried rice,  I specifically ordered it,  because I try to differ my food. For lunch I am often forced to eat not fried rice as these places are normally not that well equipped…​ 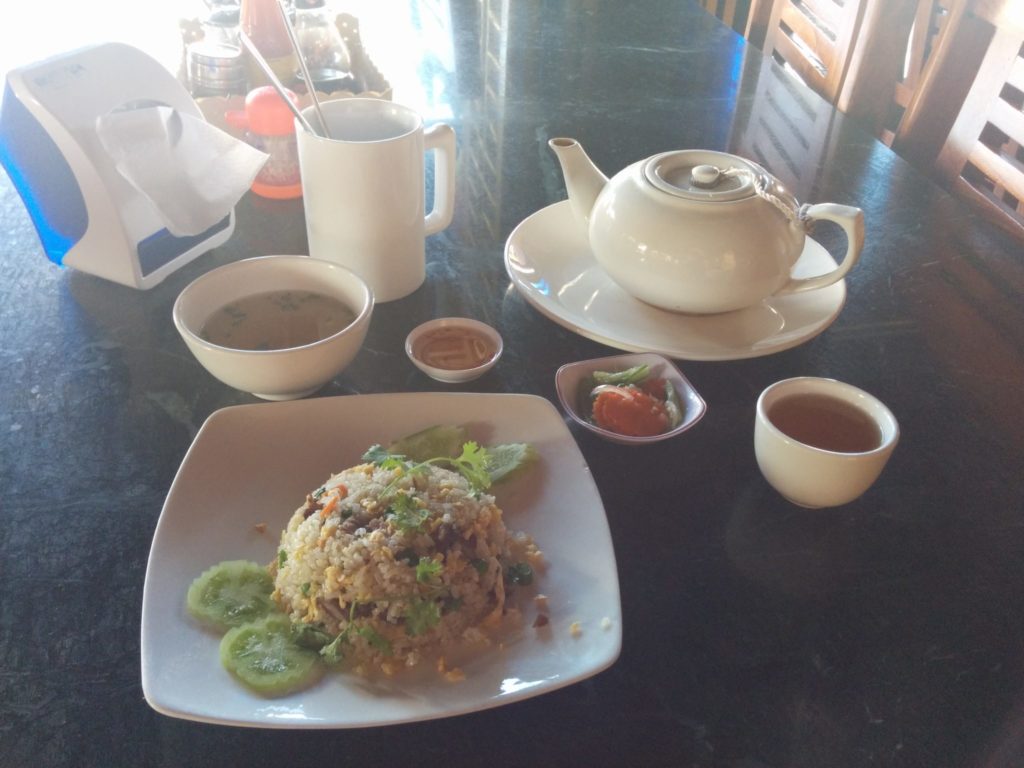 As the place wasn’t at my guesthouse I went there on my bicycle. When I left they gifted me a little bottle of water😀 (but still they were over changing me for the food)

So I went on my way,  140 km ahead of me to the next town where there are guest houses. The weather was clear. This leads to a problem: it gets really hot…​ 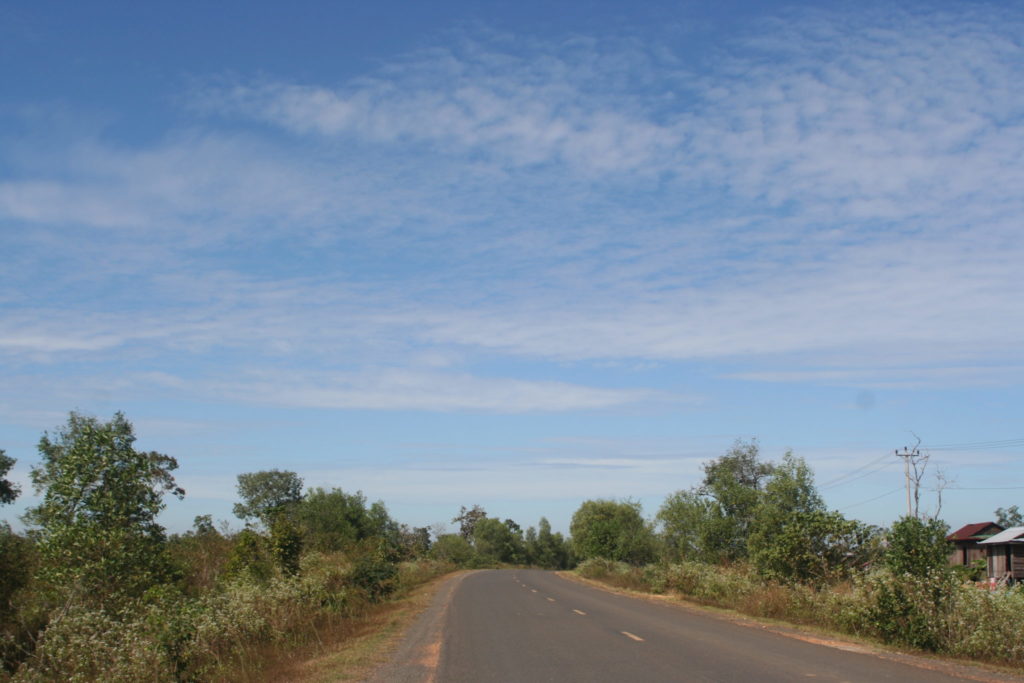 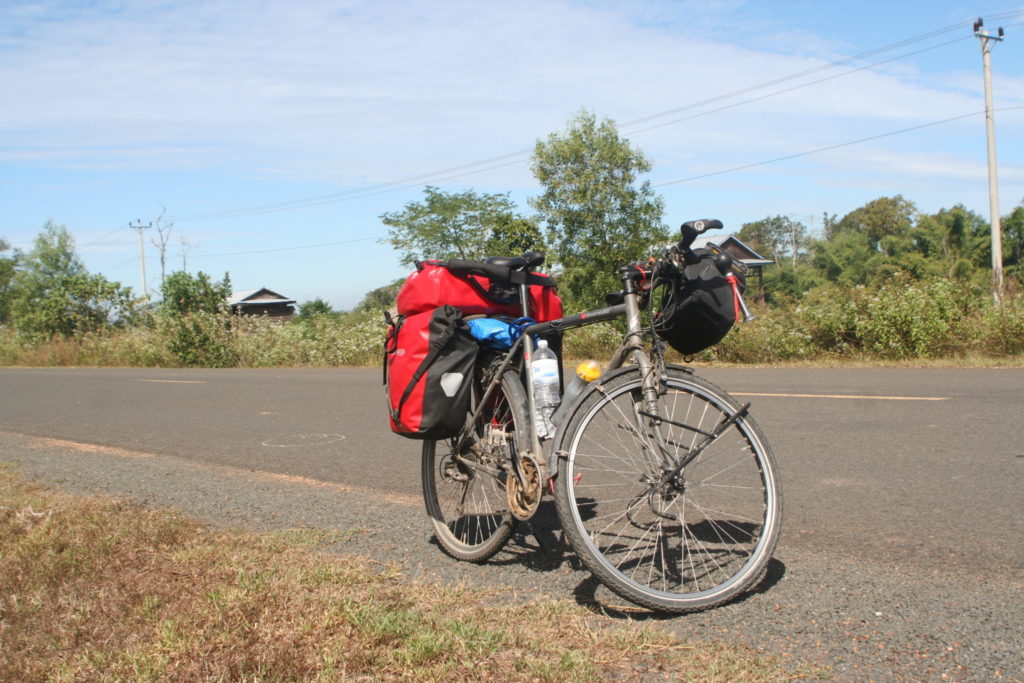 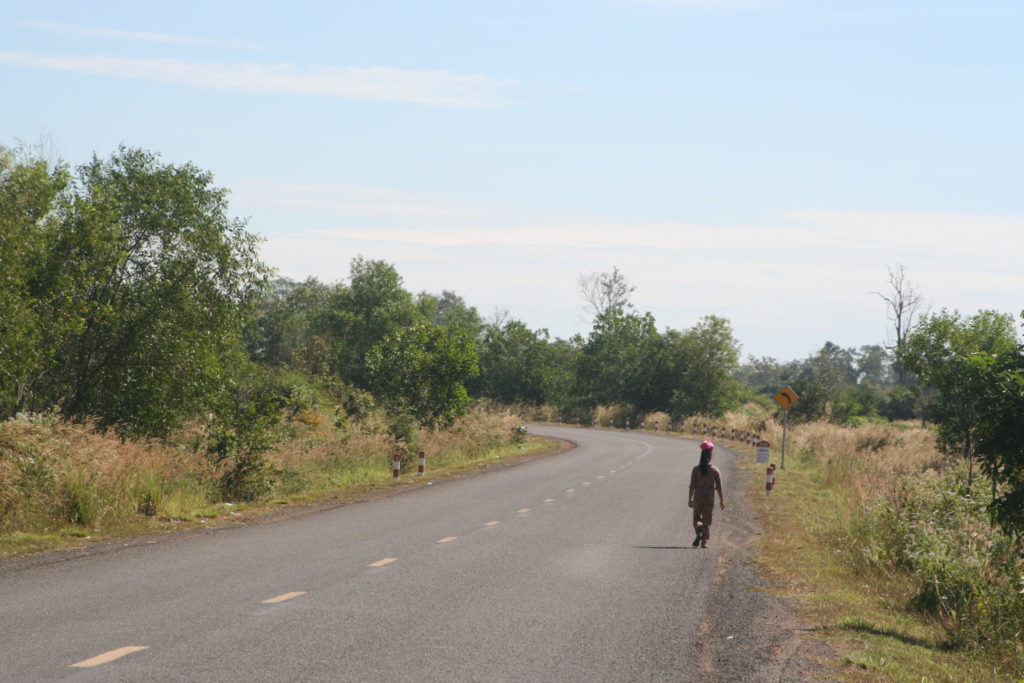 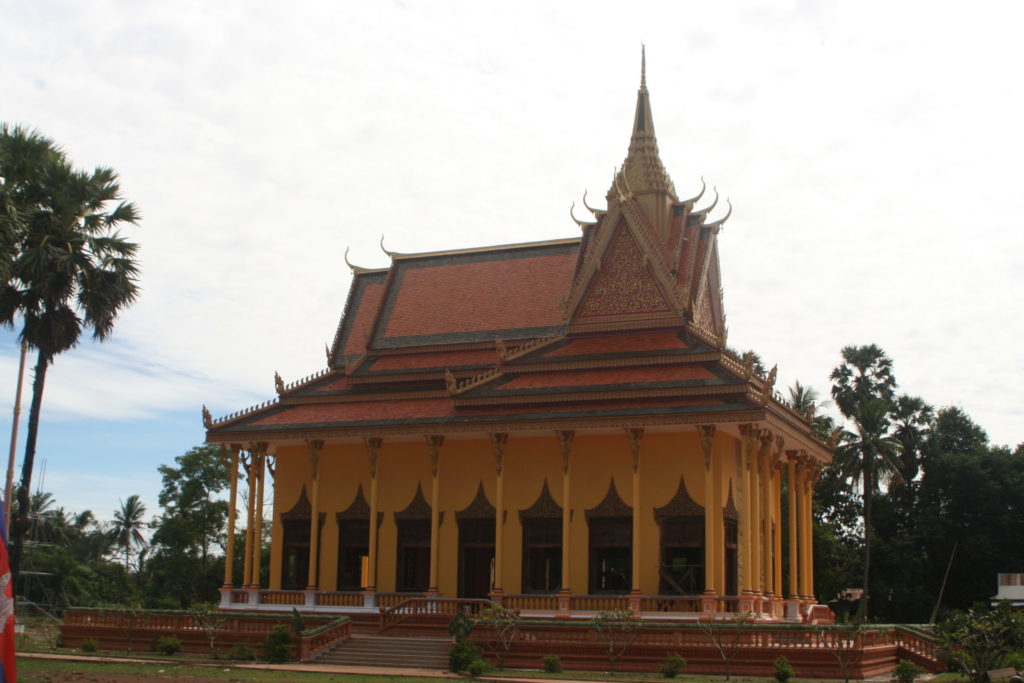 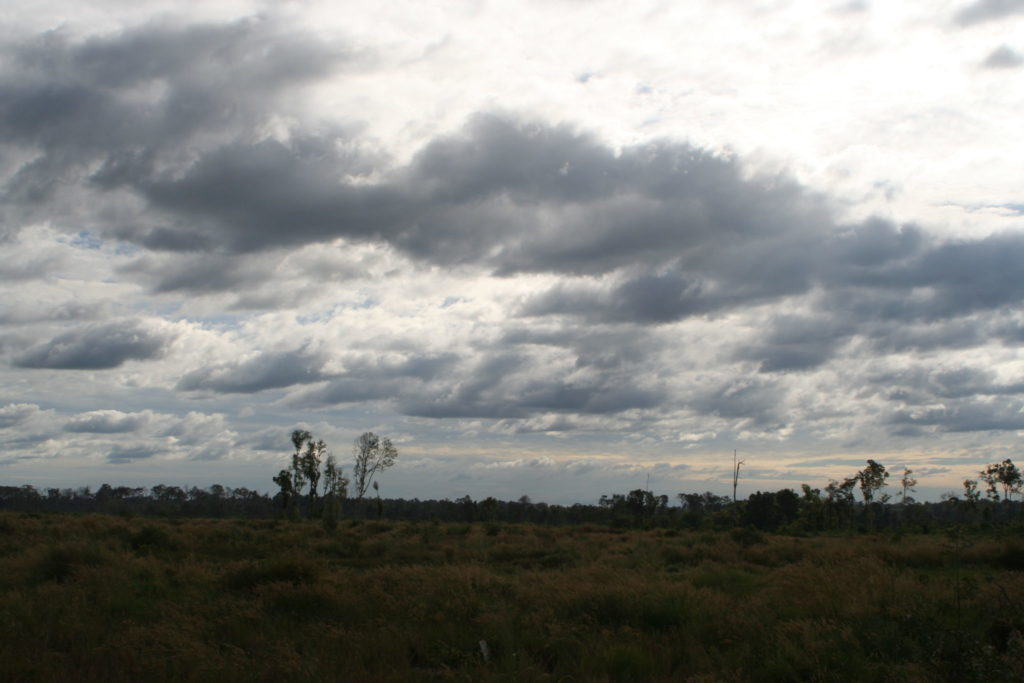 Eventually some mountains/hills came up😀 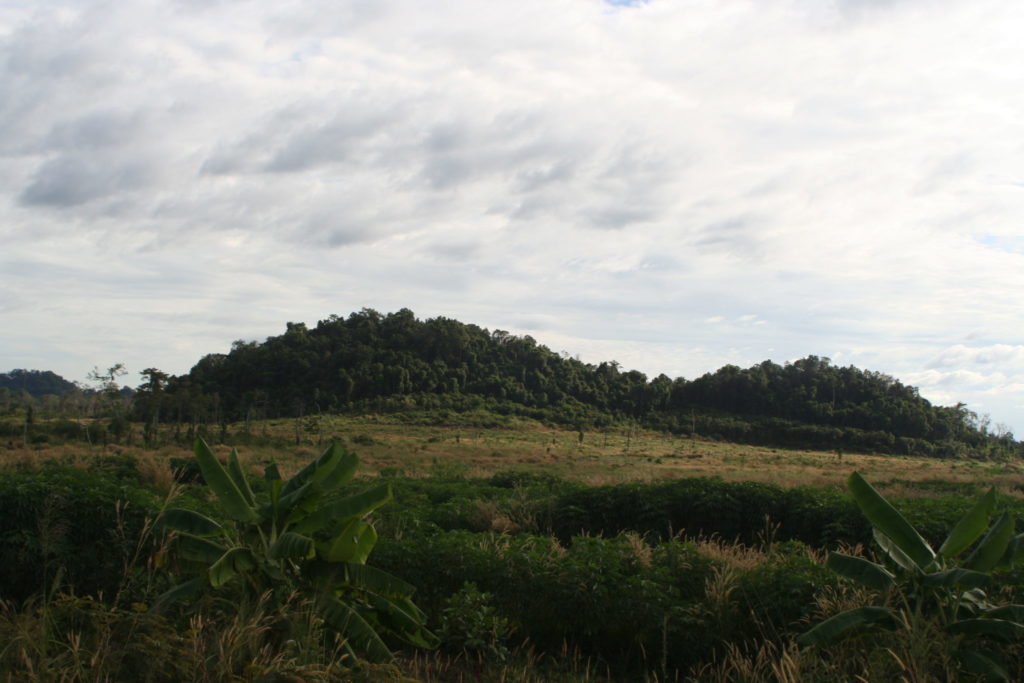 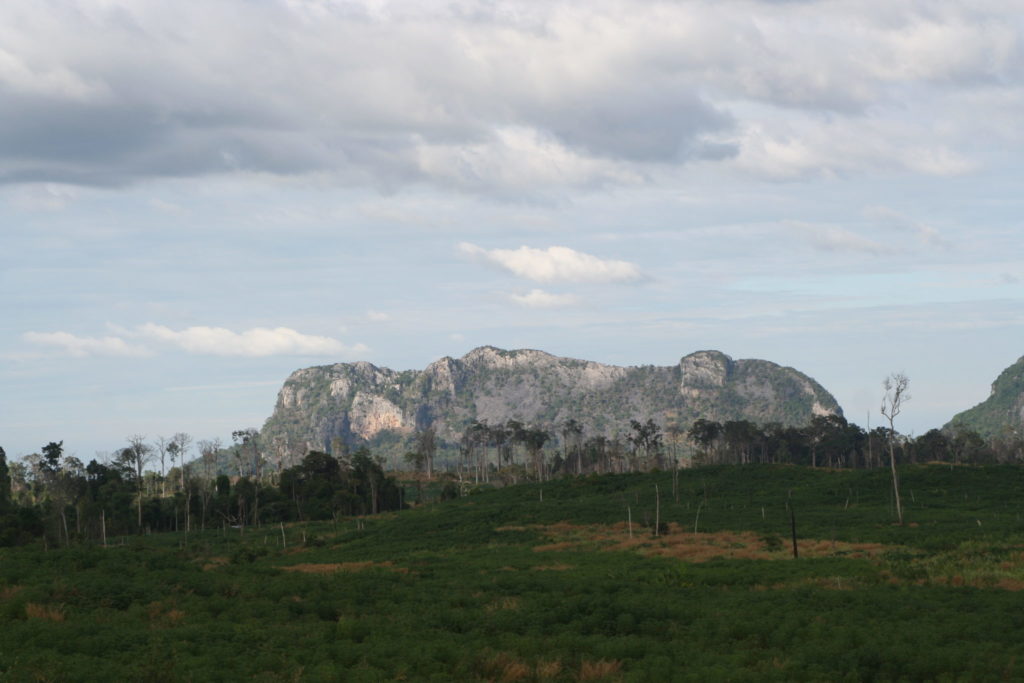 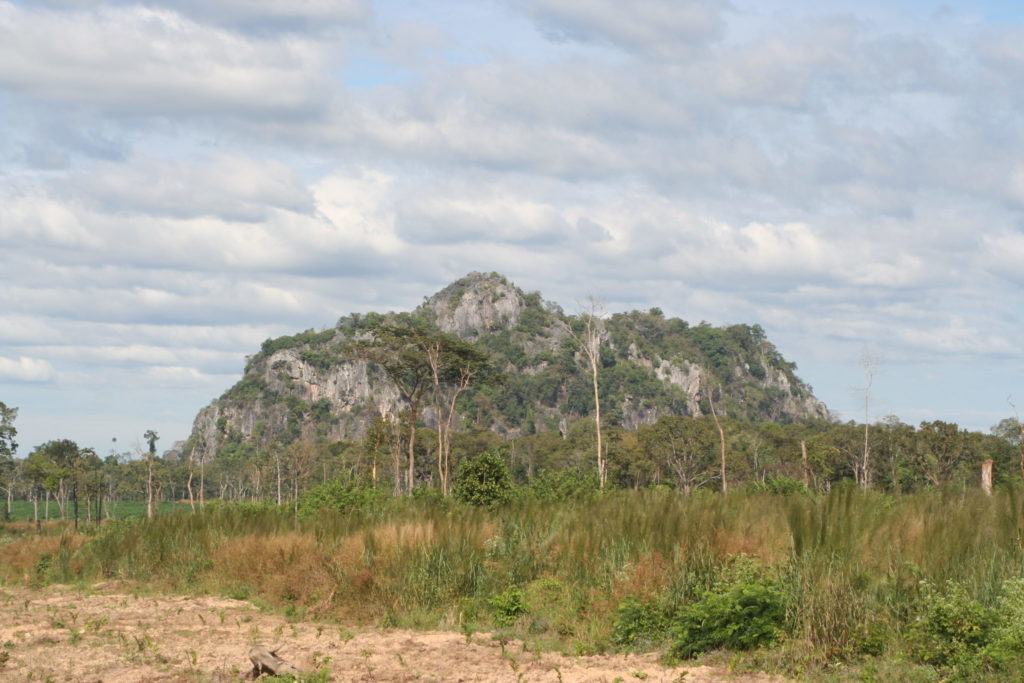 As it was a long way and went up a little bit (100 meters 😂) and then again going down and up and down…​ It lead into long riding as I was slow and I arrived in Stung Treng when it was already dark. 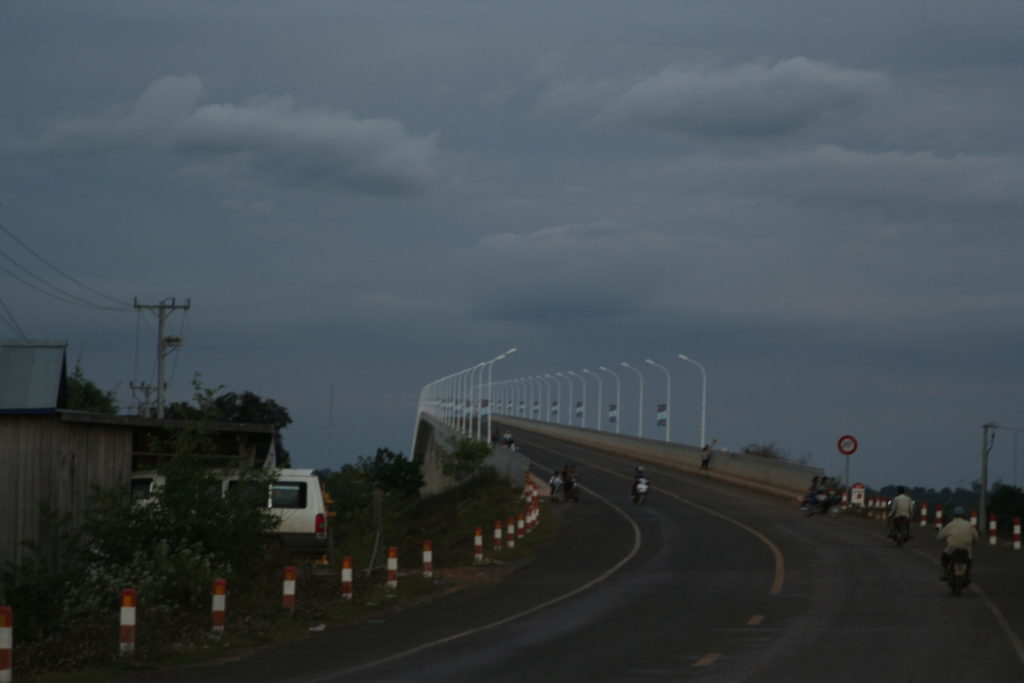 After the bridge, the search for guest houses began. There were some more outside the city but I wanted to get mor into the center. So I followed my GPS to one in the center. It didn’t exist or I was unable to find it…​ I found another one but this one was to expensive (15 $). The next one could only show me the price of 6 $ but I was unable to ask my primary question “where to store my bike” because of him not speaking english and not understanding my sign language. I continued to find one for 7 $ with hot shower and english speaking guy. My bike should be placed in the inner courtyard, but I was unhappy about it,  so I asked to place it inside next to a bicycle which was already placed there. Then the man got angry and shouted at me something with private bicycle,  private family room and money. I ended up leaving my bike in the courtyard😂 (unfriendly guy)

Other news from today: My package arrived at home today 😀 After only 13 days. I thought it was lost because the tracking number they gave me wasn’t working…​ And it wasn’t opened once😀

For tomorrow I have to do another 130 km… That’s the downside of travelling with the bicycle,  sometimes you have to travel this much as there is no closer place to stay. No I don’t want to stay somewhere outside because of the mosquitos and wild animals and dogs. After all I don’t have my tent on me anymore. And because I need the whole day for long distances I can’t really visit little cities like the one I am currently in (Stung Treng)  which are nice for 2 to 3 hours but not for a whole day which I would have to stay when visiting because it would be too late to start cycling for the next city.