As our guest house didn’t serve breakfast we needed to go into the bazar and get some there. But first I had to wait on Tomaz to come back from the sunrise viewpoint. Shortly after 7 (yeah I get up that early every morning) ,  he arrived and we went out.

We had a great last breakfast together,  it just took very long for the man to make it.

Back at the guest house,  I packed my stuff and it was time to say goodbye, as Tomaz is staying in the village and I wanted to continue cycling and as we don’t have a common way anymore we will probably not meet again on this trip.

I started cycling,  at least I was sitting on my bike,  because I drove down the steep road I was cycling up yesterday,  but this I was rolling it down😀 it took me 20 minutes to do 8 km included in that time are some pictures from the moment when I was above the clouds😀 Arrived at the bottom, I was underneath the clouds,  so no sun anymore. 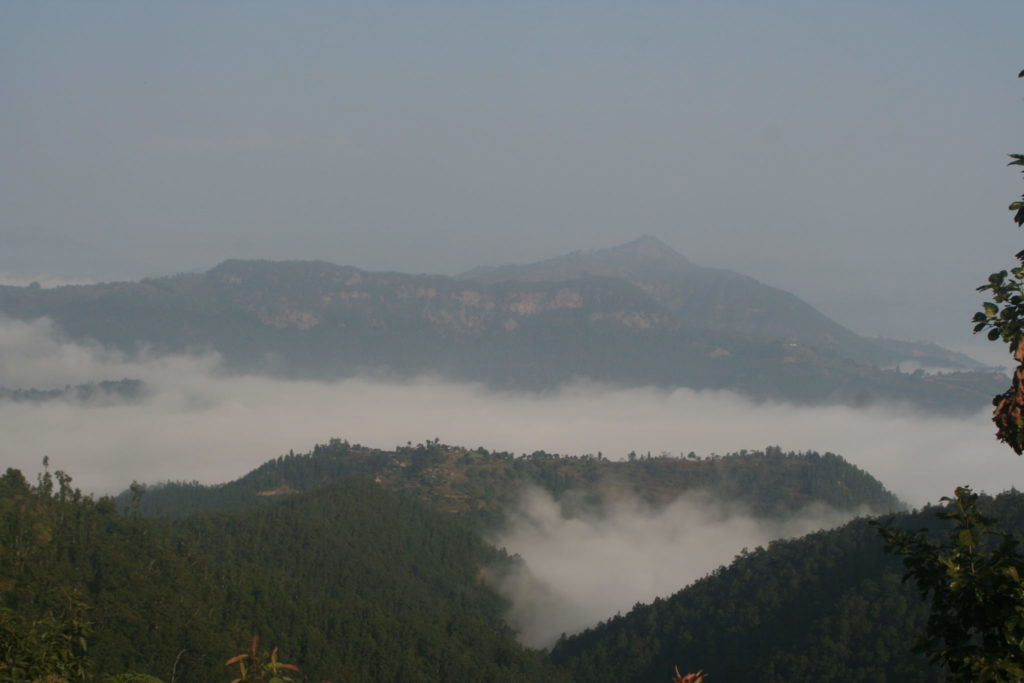 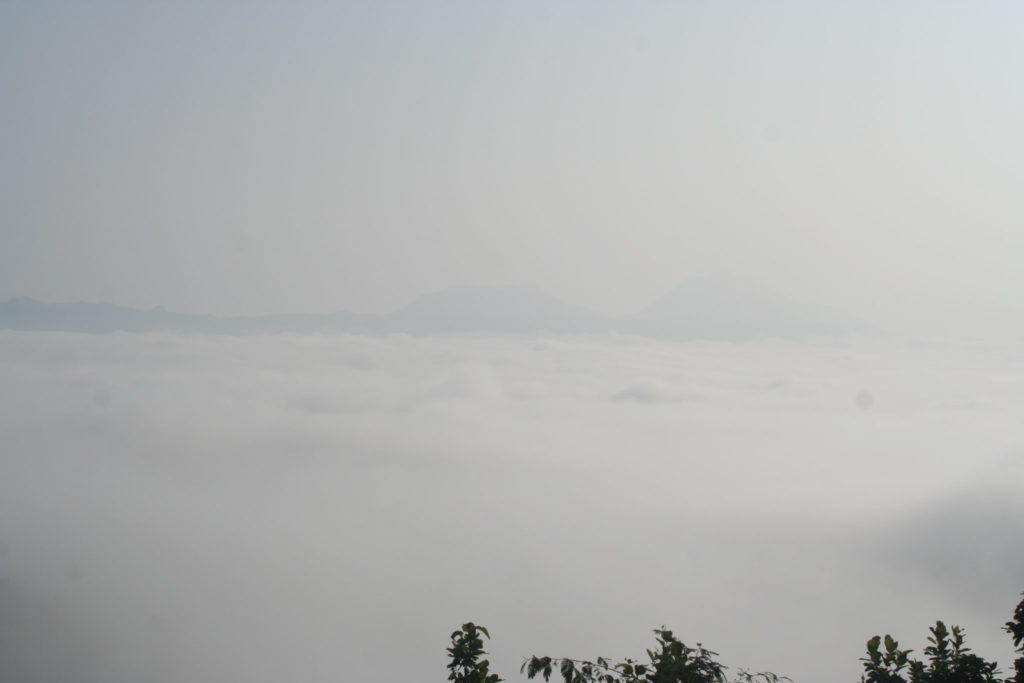 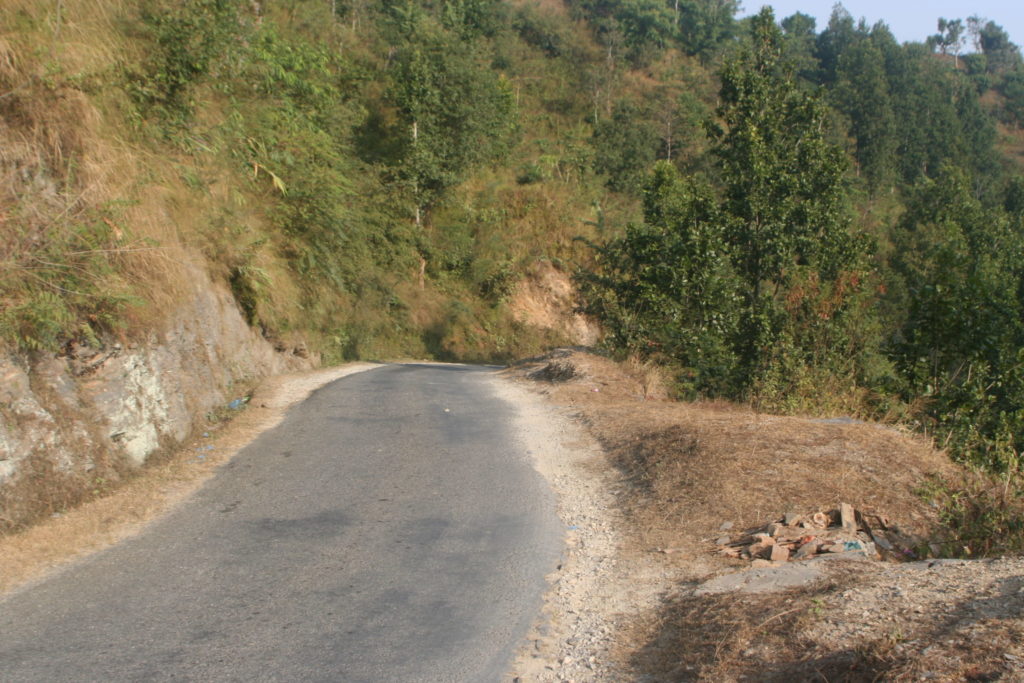 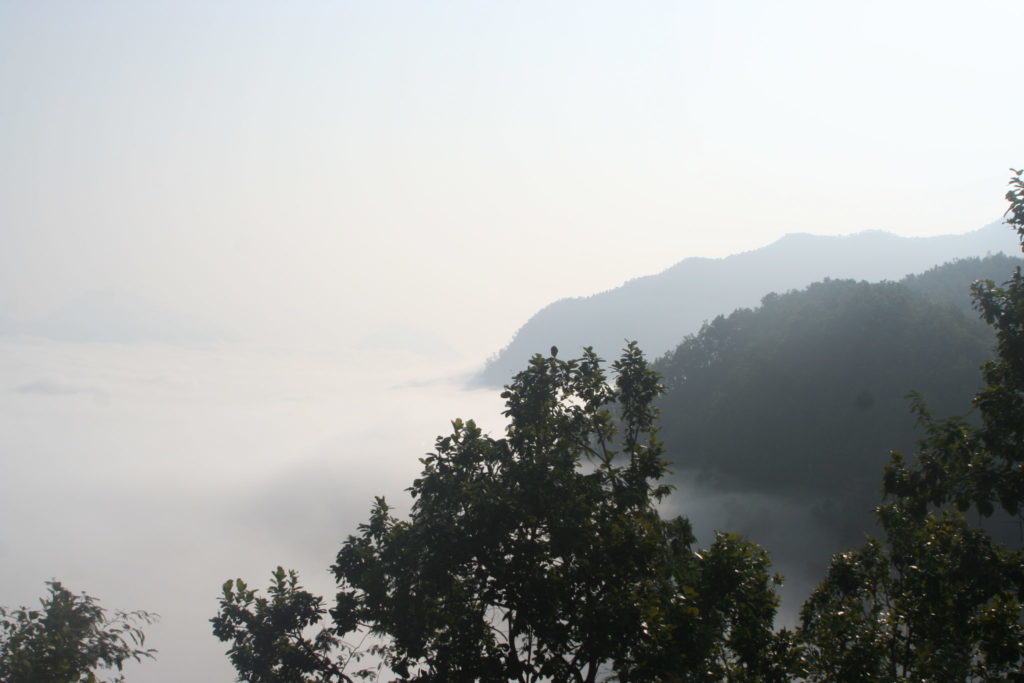 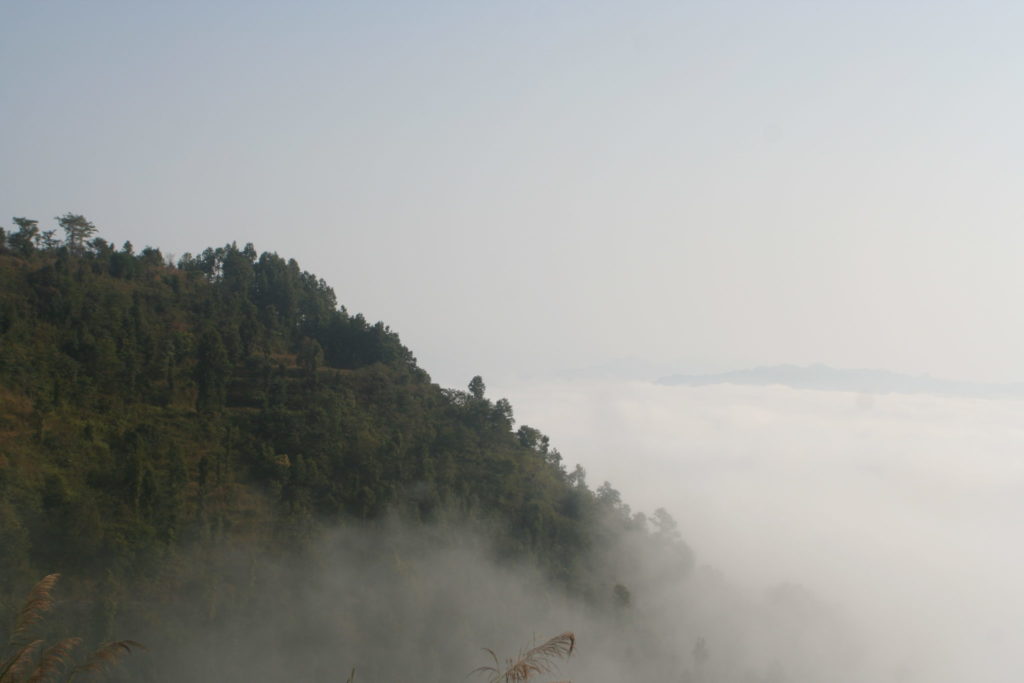 I wanted to go into the cave which was close to main road,  but I didn’t find a decent place where I could drink a milk tea and leave my bike while I would have gone to the cave,  so I decided to skip the cave and continue my journey. 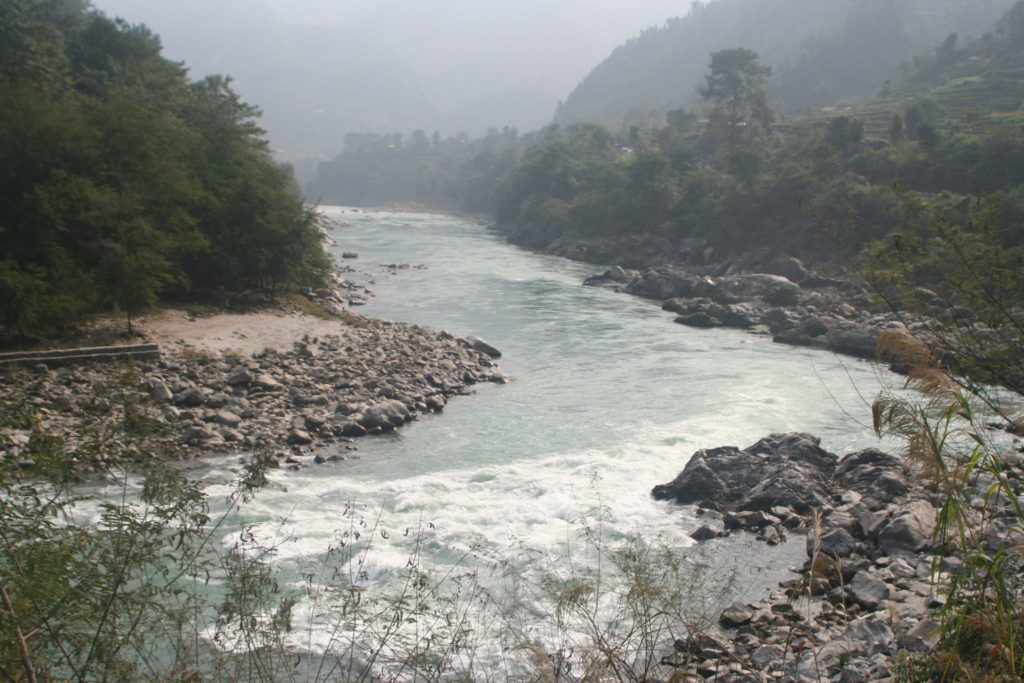 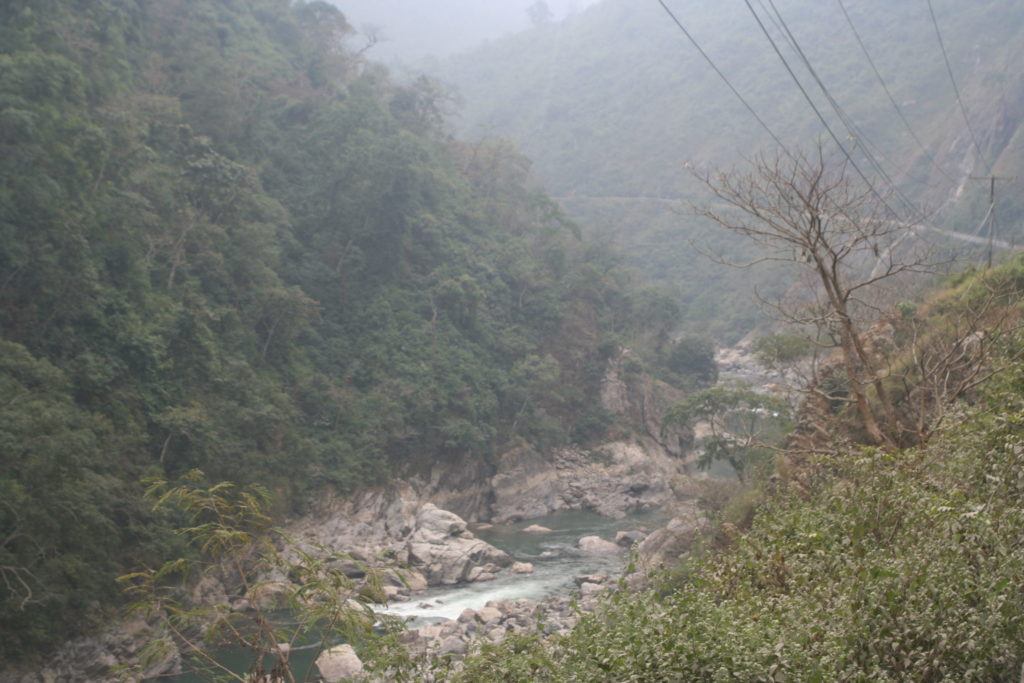 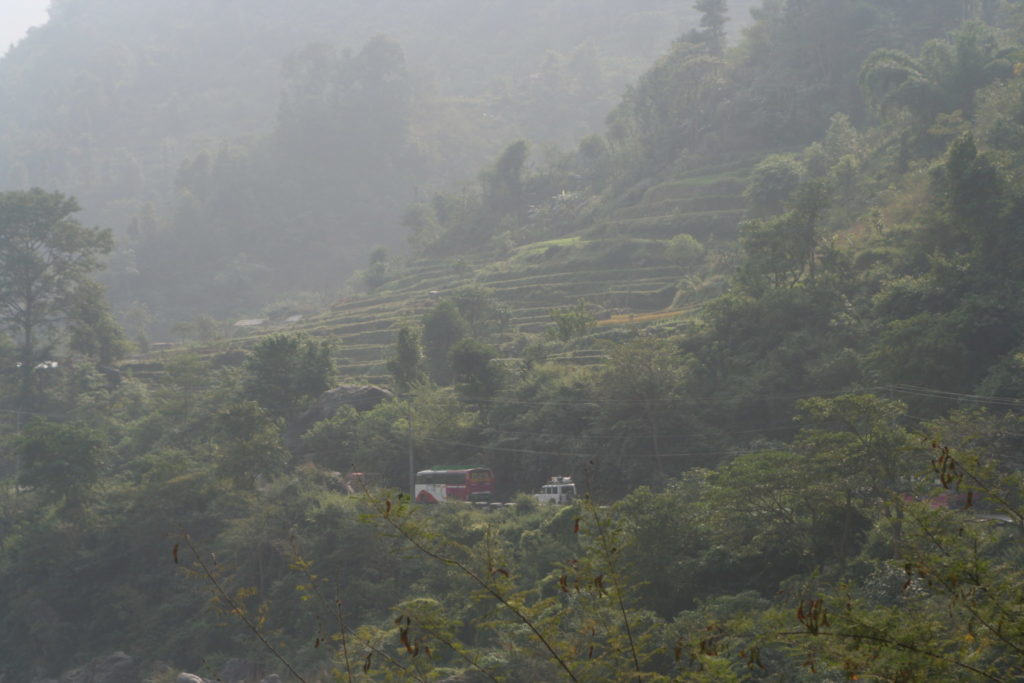 So the cave was just a point on todays route.  My destination was the cable car at Manakamana.

On the way there it was very cloudy until 10:30 when I mad a break for a milk tea. the sun came out and I wanted to make a picture of my bike. Before I took out my camera I saw the building in the background,  some kind of water power plant,  guarded by army and a sign “NO PHOTOGRAPHY”. So I decided it would be better to not take the camera out,  there will be another beautiful spot of my bike in the sun😂

On the way to the cable car, I passed the fork where the road splits. One road goes to Kathmandu and the cable car,  the other one goes to Chitwan National Park. So tomorrow I need to cycle back to go down to Chitwan. Just before the fork,  I needed to cross a bridge, I wanted to take a picture of the bridge,  and then I saw, a little higher than the bridge,  the road to Chitwan,  look for yourself. It will be fun to ride down that road😂 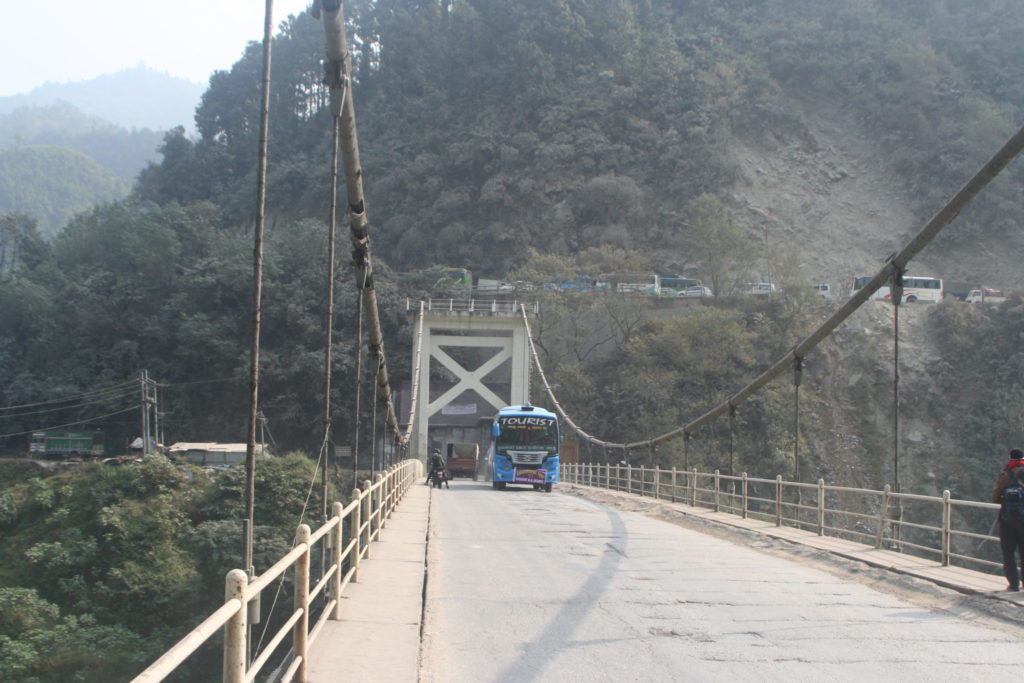 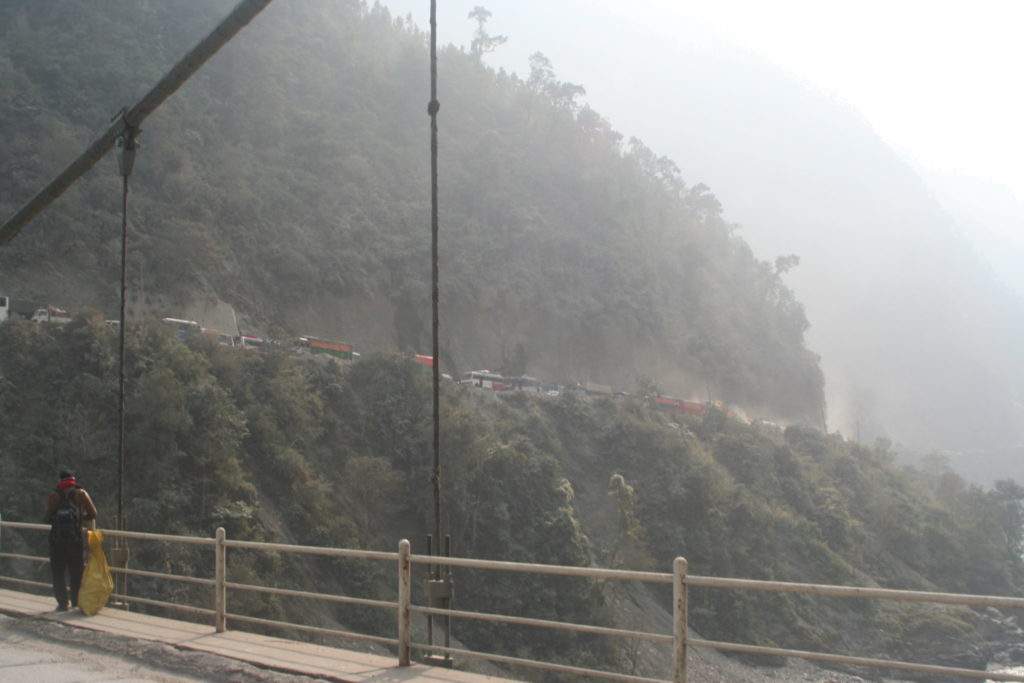 After the village with the fork,  the traffic got little but more,  but it was still fluent,  so I don’t know why they were standing all there. Only 6 km left to the cable car. At that moment it was still not clear whether I could take my bicycle up with the cable car or if I need to leaf it down and go up with some luggage. I came there and I saw this long queue to get into the cable car but in front of the ticket office was nobody,  so I decided to ask for the price. Actually they take the bike up for free😀 I decided to go up for 9$ (they always give the price in dollars). One fun fact: a goat costs 40 NPR to get her up via cable car😂 A bike is a real advantage when going up, because you don’t have to wait in the queue, but you can simply enter through the exit😀 The only problem: Stairs (the image was taken more than half way up) 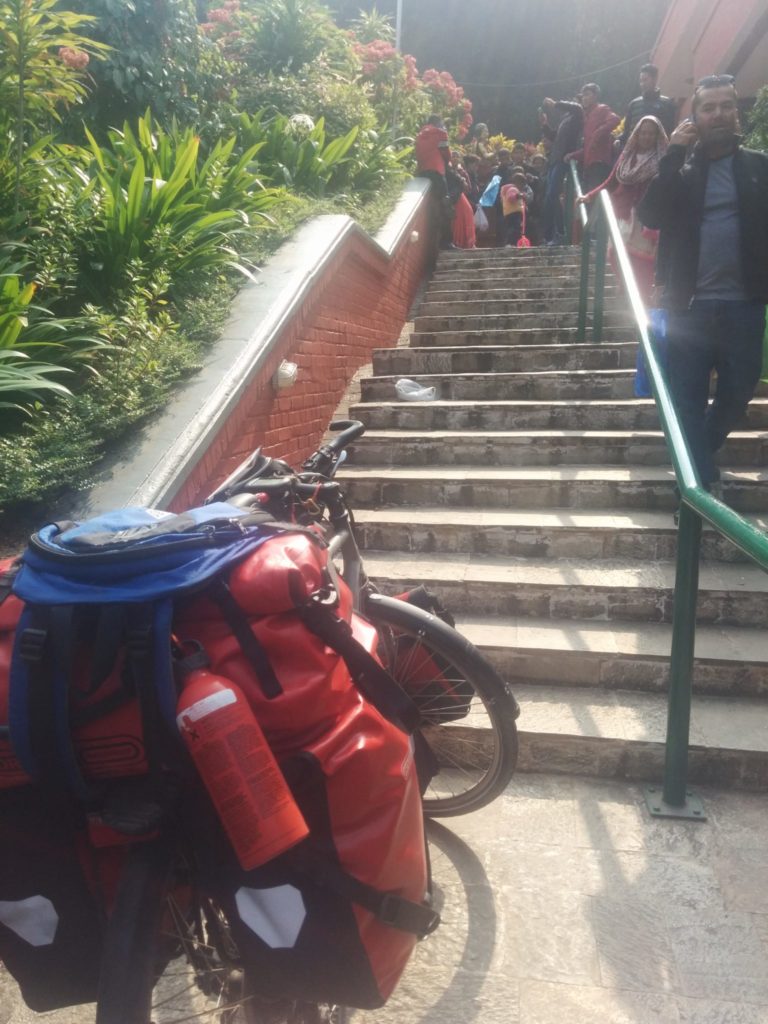 Arrived at the cable car,  you just need to wait for one carrier cabin to come by,  you place your bicycle in and hop on into the next person cabin. Arrived at the top,  somebody will take out your bike as you are not there yet. So really nice☺️ The title of today’s  blog comes from the cable car,  as it is lazy to take it to get up. 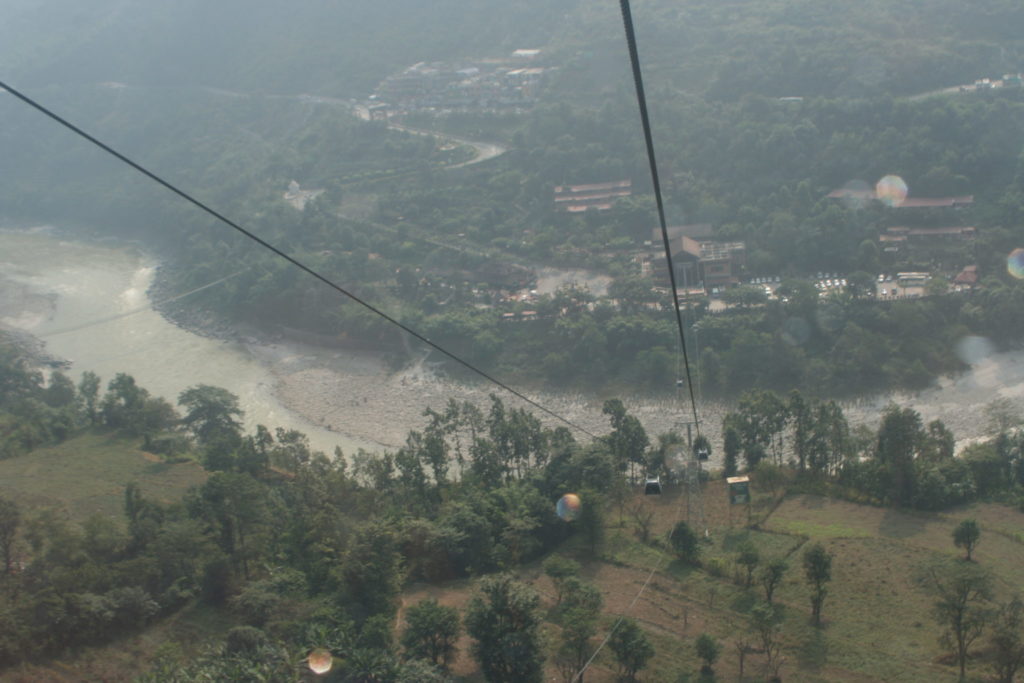 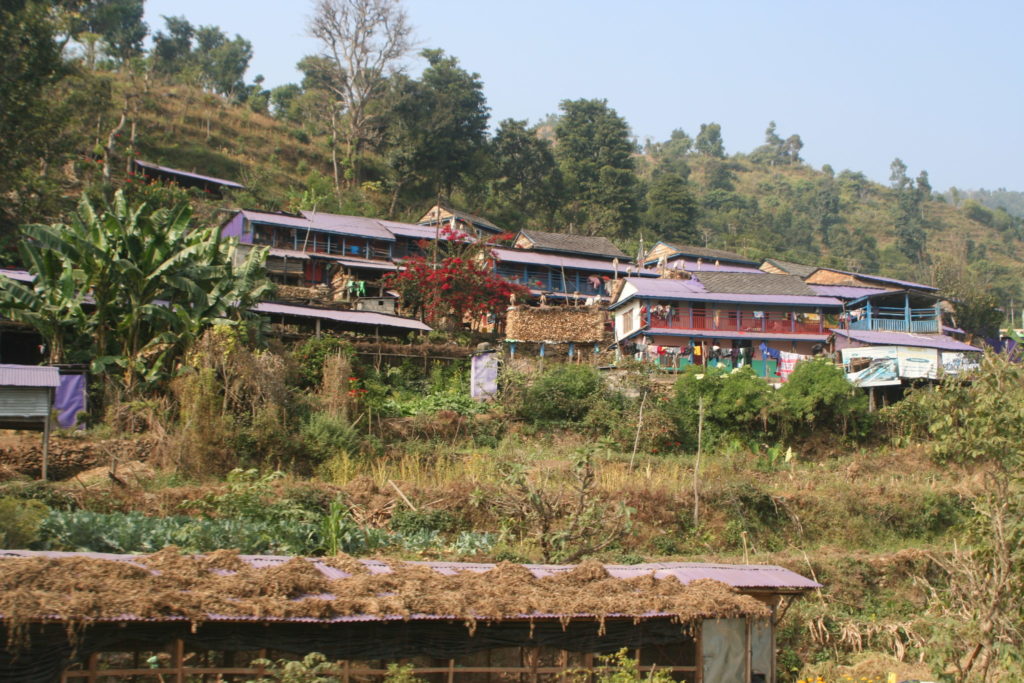 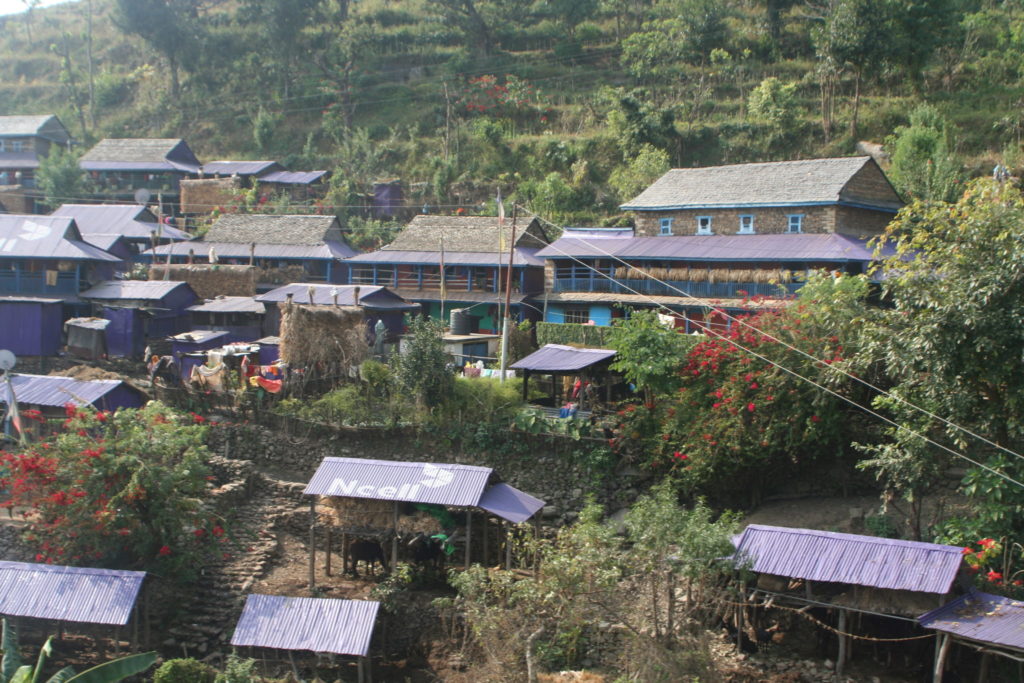 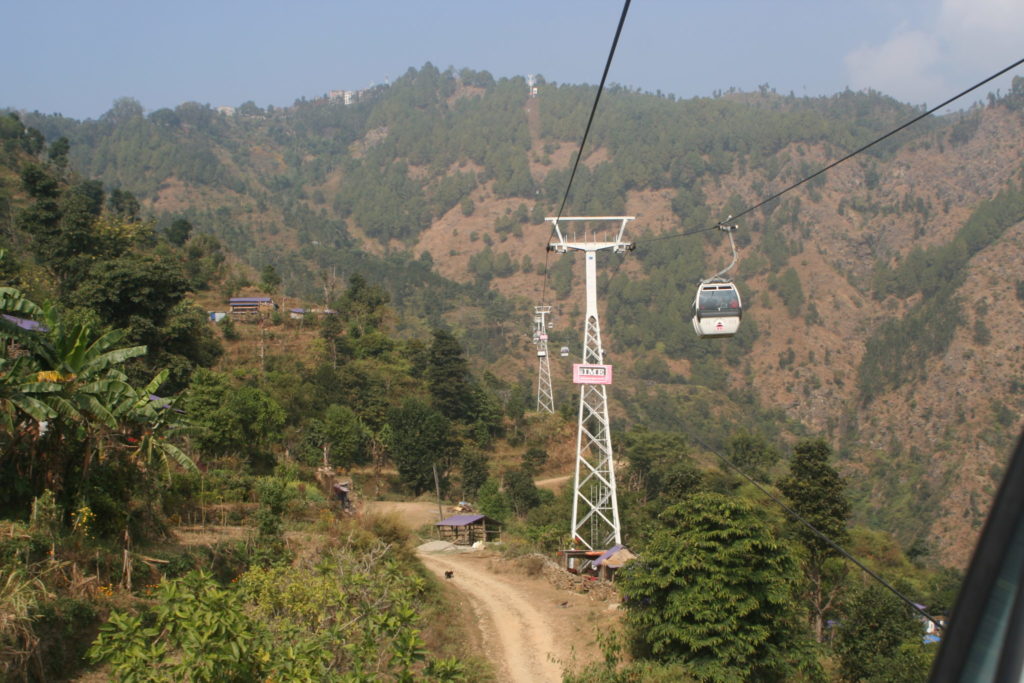 In the cabin infront of me was my bike:

Arrived on top I git my bicycle and went out,  more stairs followed by more stairs😂

As it was midday I also ate lunch there. I was asked to tell a little bit more about the food here,  so today I hat chicken Chowmein.  These are fried noodles with chicken and vegetables. It is also possible with buff meat or just with vegetables. If you don’t say anything they will probably make it spicy😂 I eat one variant of it nearly every day,  for lunch or dinner. 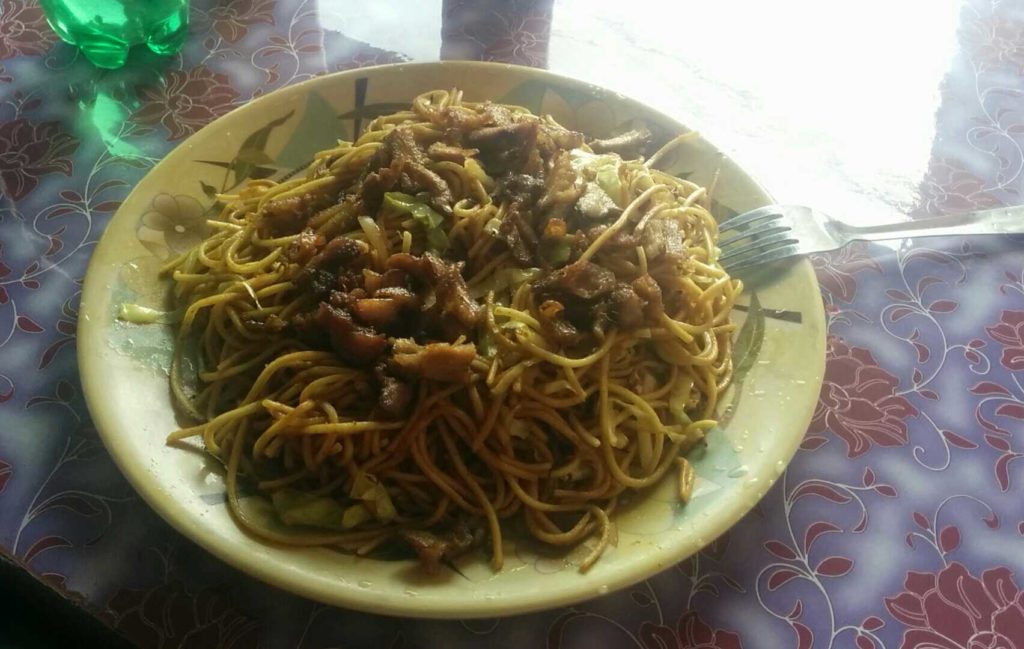 The reason why I came up here, was a suggestion from Tomaz. First of all here is a temple, secondary, there is a road down. I thought it would be a beautiful village. The reality: the village isn’t that beautiful,  the temple is under construction (probably because of the last earthquake,  i need to check that) and there is a very ling queue of indian and nepaleas people. So not very beautiful… this probably explains,  why there are no western tourists here expect me😂 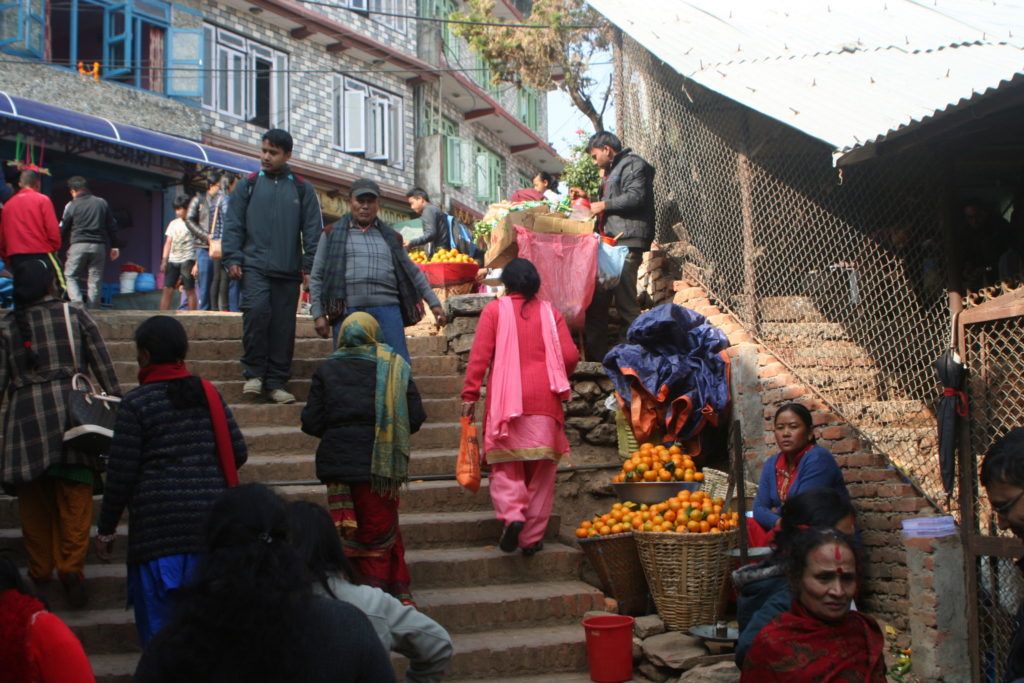 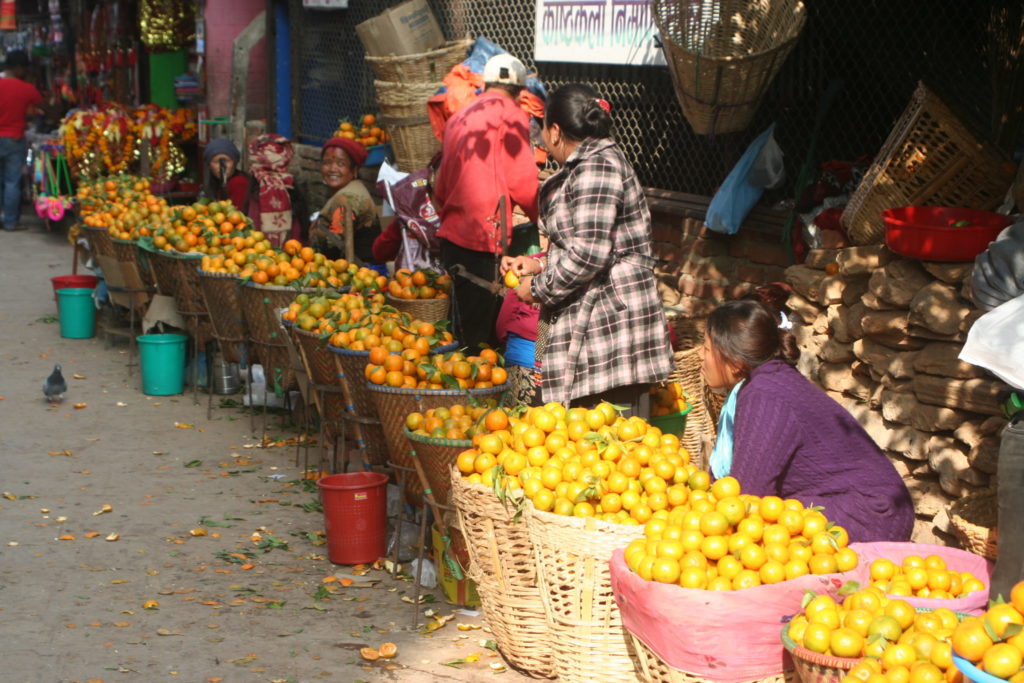 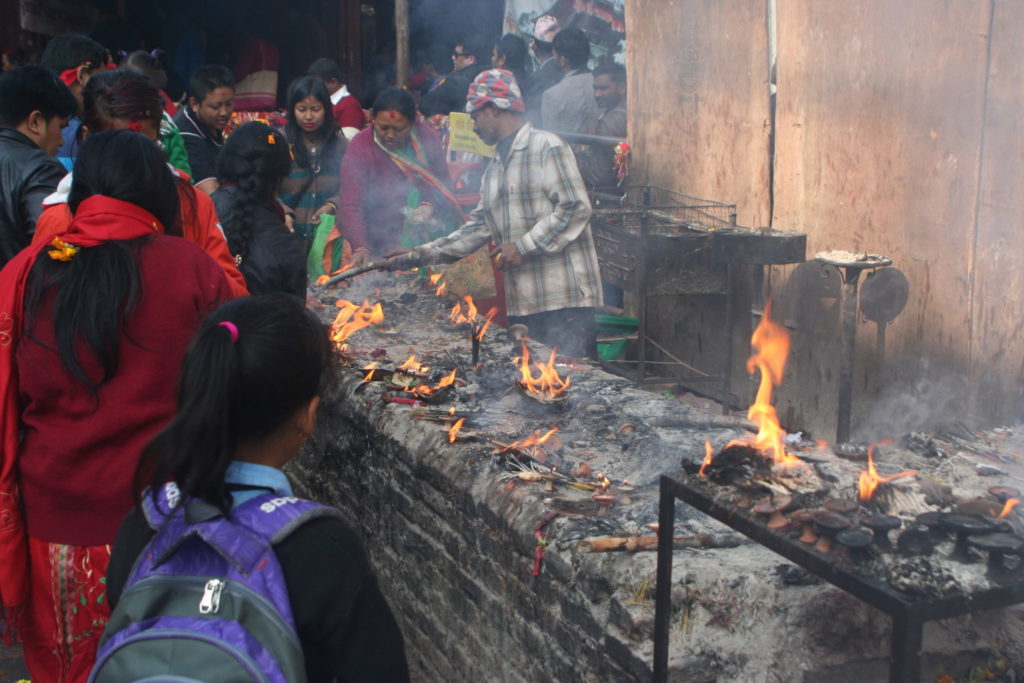 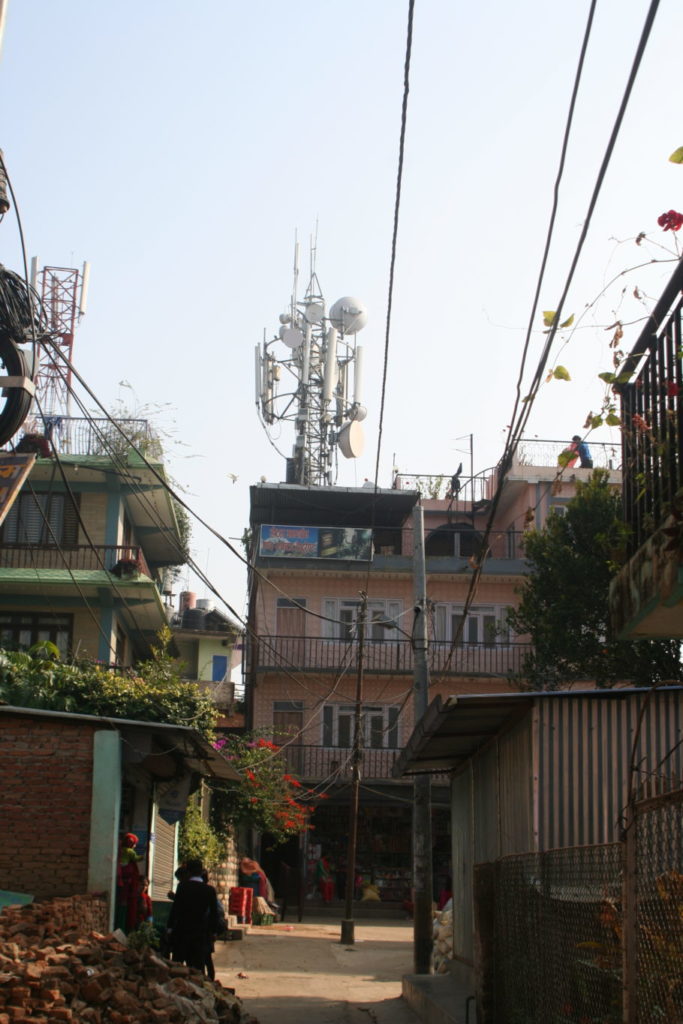 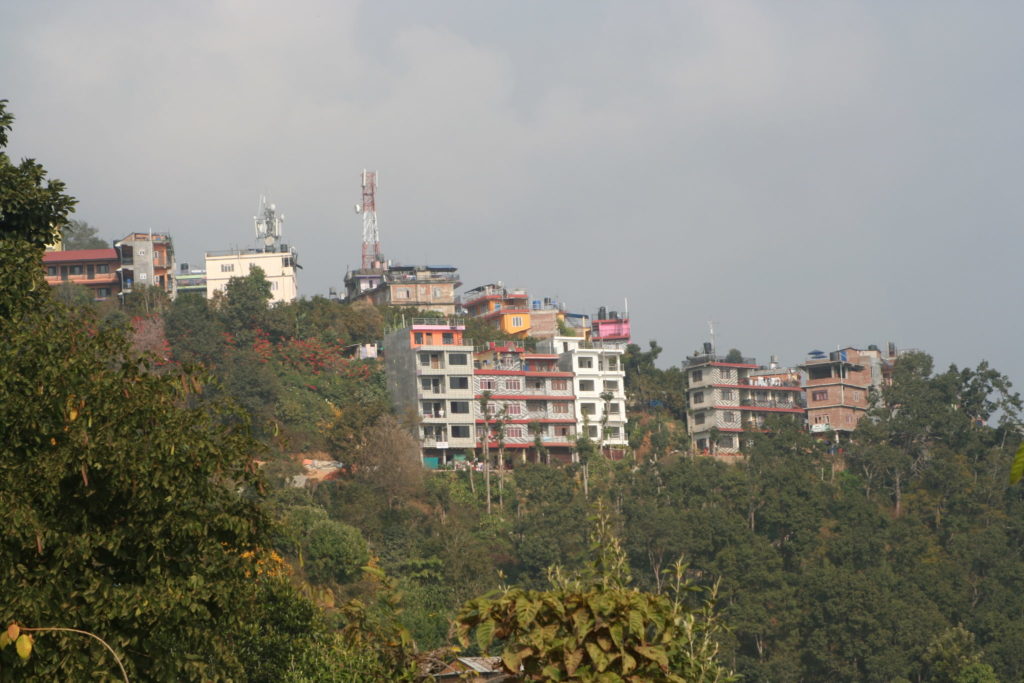 All over the village you can make a picture in front of a “blue”  wall and they will photoshop you in front of the temple😂 Probably because of the construction.

As the village wasn’t as amazing as expected, I decided to go for a little walk,  to checkout the route to go down back into the valley. The road is made out of sand and rocks. I am still not sure if I want to ride down that road tomorrow. I will leaf this decision open. 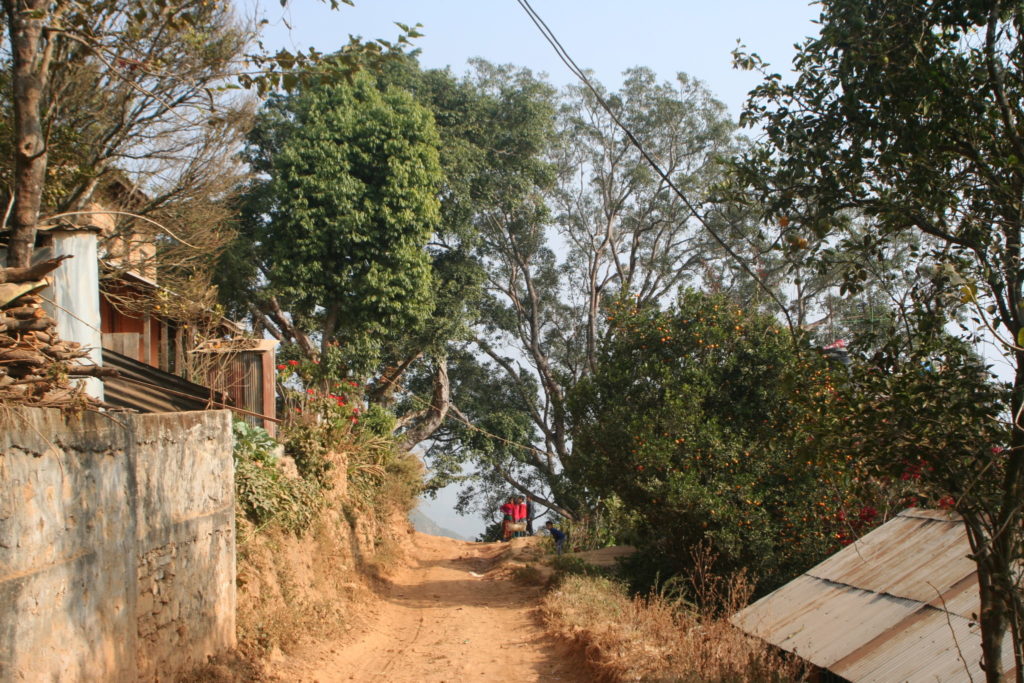 I tried to find a quite place to chill a little bit in nature and I found it,  far enough to not hear the cable car anymore😀 Before I went there I bought some cookies and a chocolate bar. The chocolate bar was really dry, a little bit like if you would eat the powder to make chocolate milk, although it is written “Dairy Milk” on the packaging. The cookies were okay,  they also included chocolate. (Another report of food here) 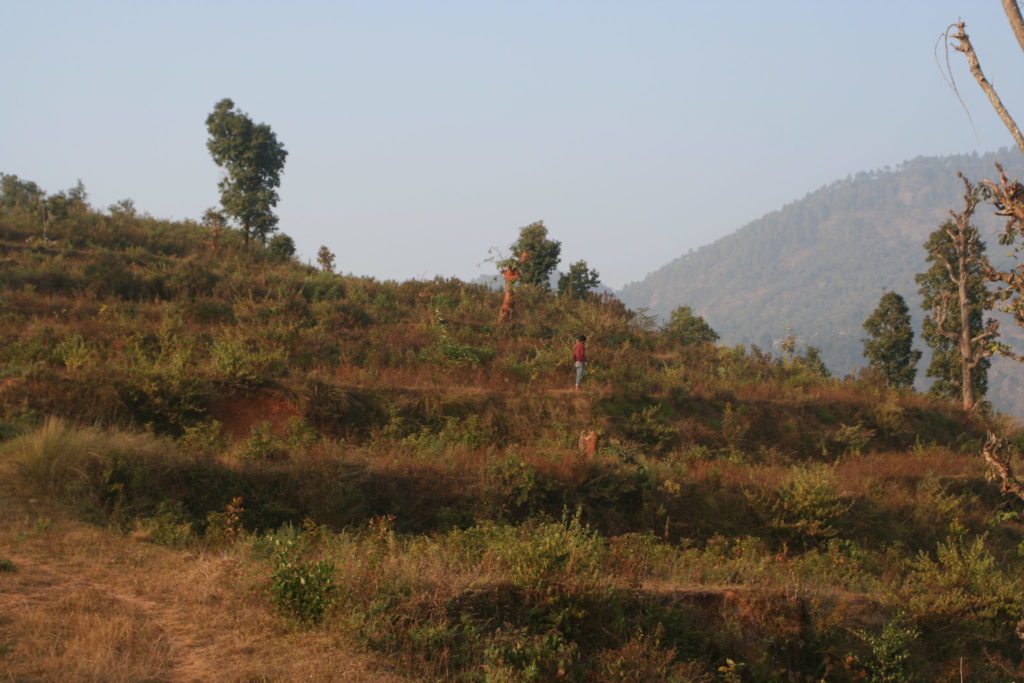 On the way back I passed again in front of the temple,  this time there were fewer people but some street dogs and they started fighting each other. People around were just looking until one could see blood then,  some of them took of there shows and threw them at the two fighting dogs until they stopped.

Now I am sitting on the balcony of the hotel. Soon I will have dinner and then chill in my room. Some reading and/or some surfing in the internet as far as the internet works.

Today I’ve tried a different approach to write the blog,  I’ve tried to write some parts over the day when I was having a break. I would be happy to get some feedback on it.