A goat makes noise in the evening (probably because they bring it to the temple). A rooster starts making noise in the morning. A baby cries the whole night through. I had the luck to have a combination of all of them😂 Earplugs didn’t stick in my ears.

After just having a light breakfast of omelet and coffee,  they didn’t have more (at least was that the result of a longer discussion) , I started my cycling. I decided to cycle down, as I thought when cars and motorbikes can go down,  then I can go down too. I checked one last time on all routing systems I had (Garmin-Gps on my bike and on my phone  Maps.me and Google Maps). I thought the way on my GPS was okay,  so I choose to follow it. after some cycling,  the GPS told me to turn around (my thoughts: fuck). Turning around means going up again on a steep… you can’t call it a road,  it was just sand and rocks. So I asked people there. I found a larger group of people and hoped to find someone who could speak english. Jackpot I found one. But he was not a local. So he asked other people, and they showed then to go down one road,  so I did. On the way I stopped a man and a wife on a motorcycle going the opposite direction of me,  so up. They told me the same to go down that road. So I continued. There were no more vehicles. The road started to look like it hasn’t been used in ages and on my GPS,  the road ended in a dead-end. So I decided to take another road to get back up. Back up means not cycling but pushing on foot. And it is not simple.

When I started pushing my bike up,  I decided to take tha cable car down when I arrived on top. 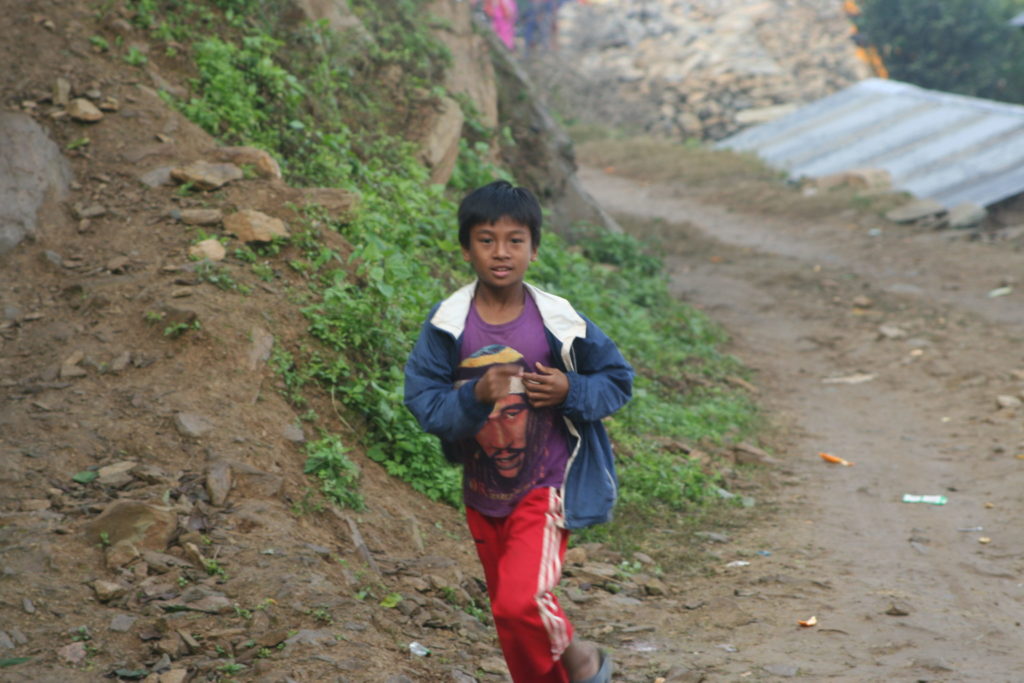 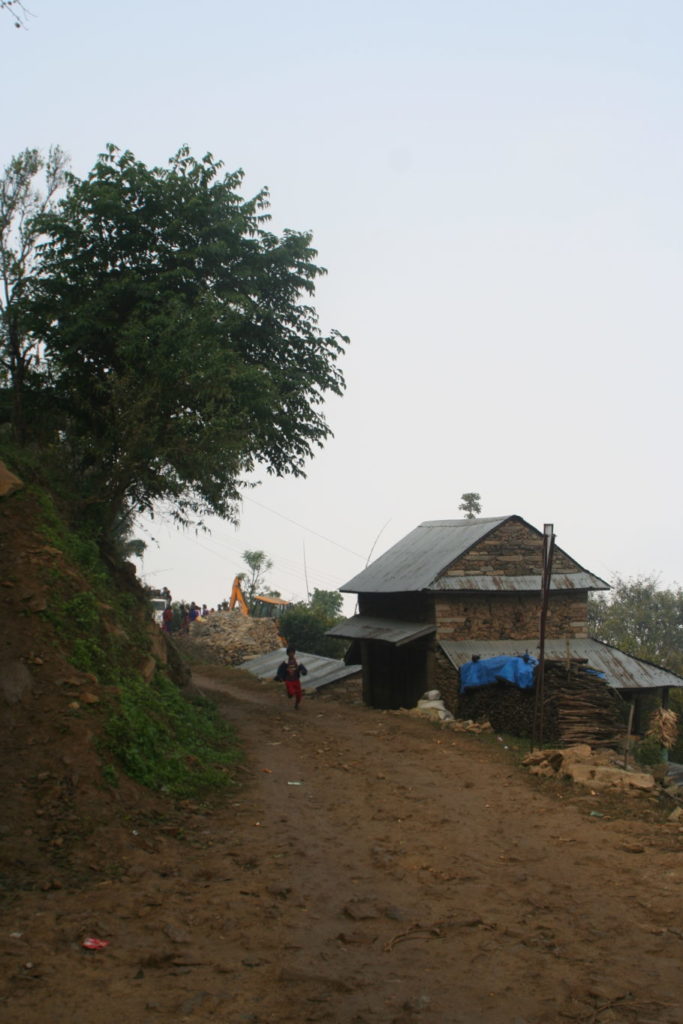 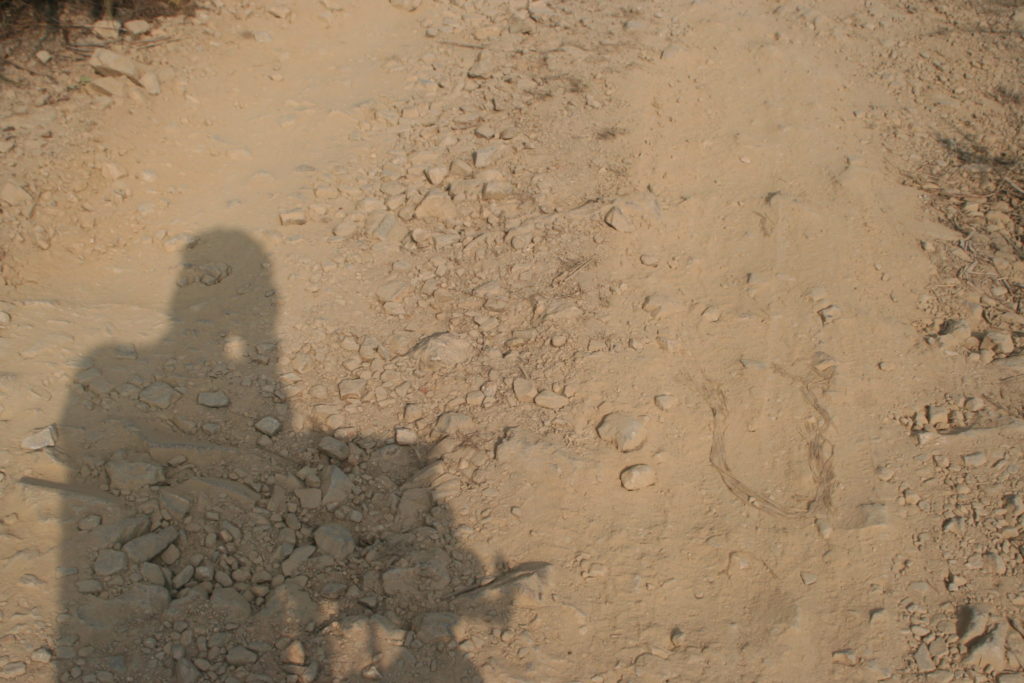 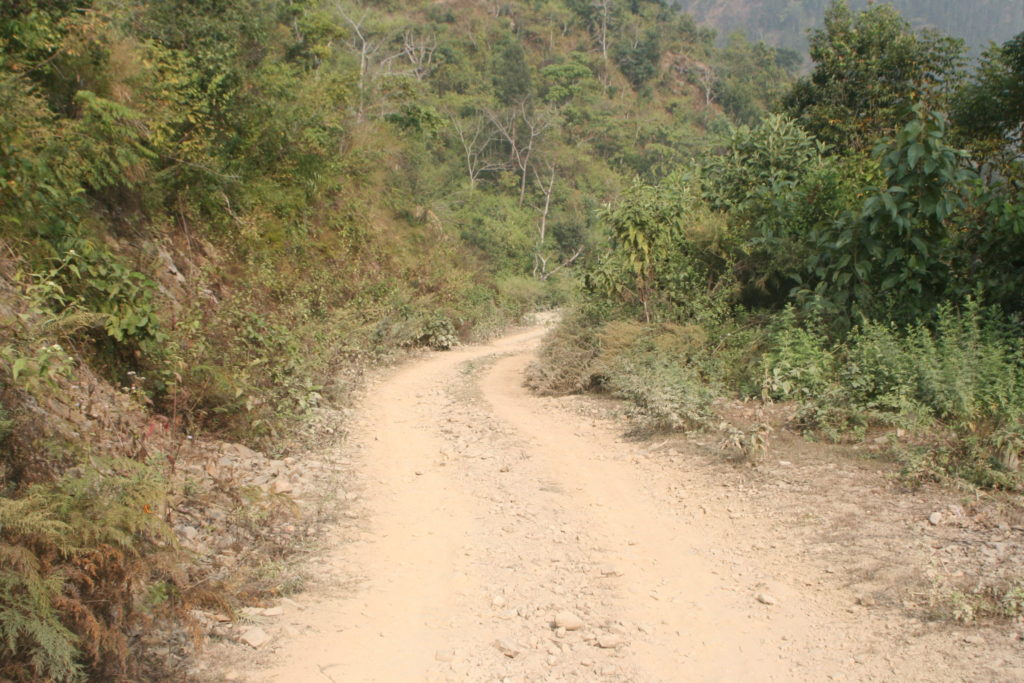 After 2 hours of pushing my bike a reached an intersection of two roads,  where I saw a man and a wife on a motorcycle. Guess what,  they were the same as before. I asked them again for the road down, this time they told me that this would be the road down. There english was really good,  so I asked them where they would be going and they were actually going where I wanted to go,  to main road. So I belive them (again). I climbed back on my bike and let it roll down and down and down. There were more vehicles on this road,  so I was more certain to be on the right one.

Finally I saw the bridge and the bottom station of the cable car, so I reached my destination. Bicycling on a suspension bridge is kind of cool feeling,  I don’t know,  it is different from when crossing on foot. I wanted to take a picture but there was a motorbike behind me and I didn’t want him to stop because of me. 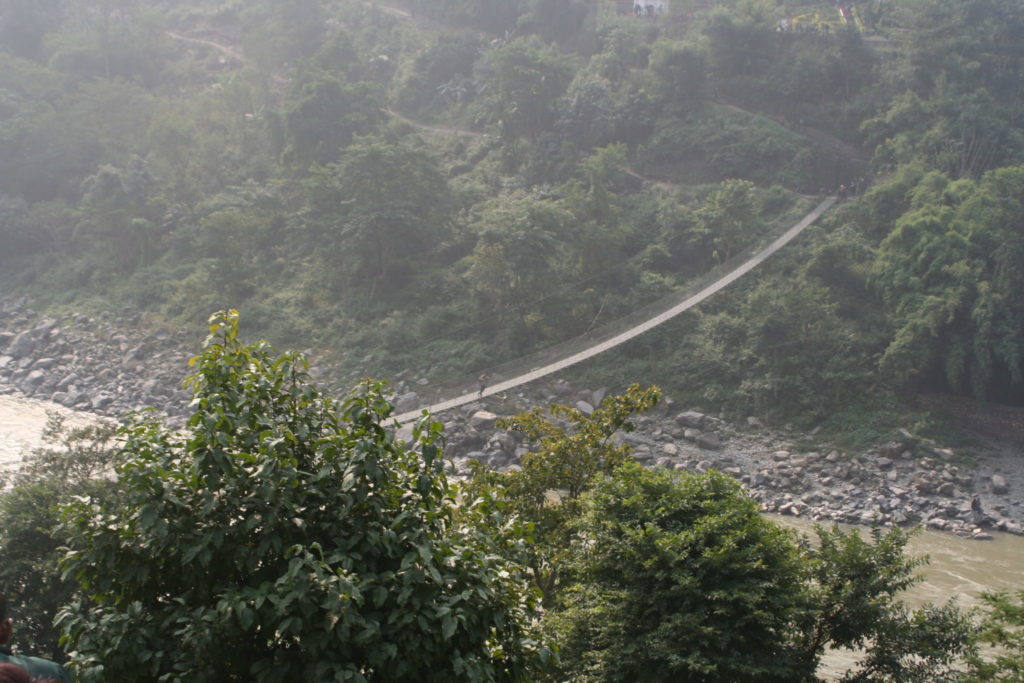 During the whole way down, until I saw the bridge,  I was constantly thinking whether it was the right or wrong decision to go down😂

After the bridge the pushing wasn’t over, I still needed to get up to main road. And again too steep and rocky to cycle. 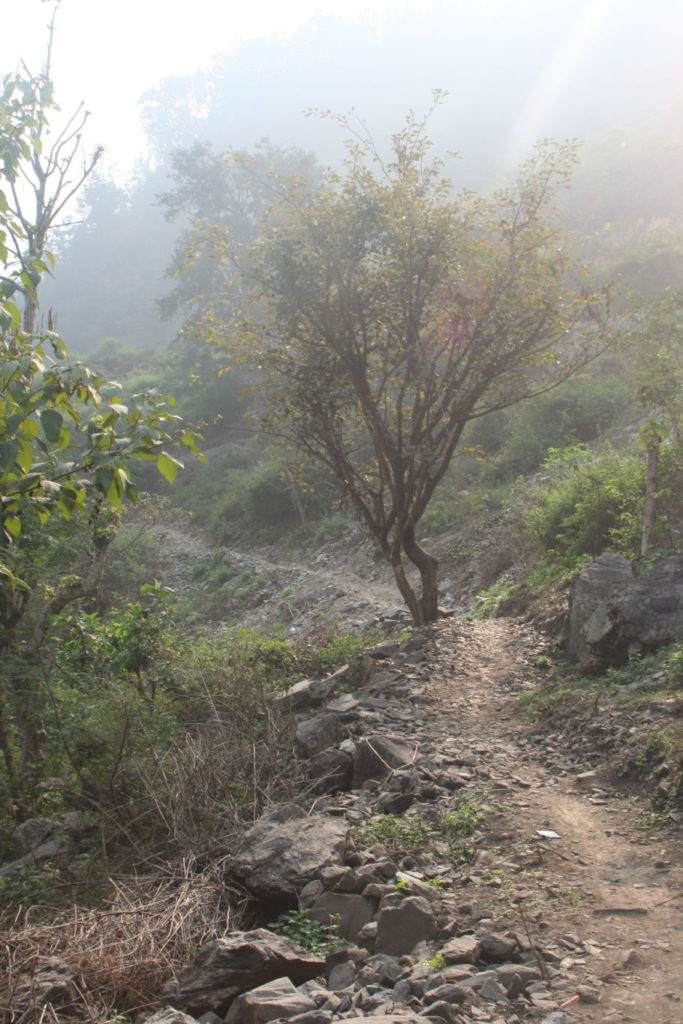 Arrived at main road I quickly had lunch because it was already 12 and I just had this light breakfast. It took me over 3 hours to get down and it was only  18 km…

Back on the road I wanted to get to Chitwan National Park,  so I went back to the village with the bridge from yesterday and took the other road at the fork. The road where the vehicles were all standing,  but today it was fluent. 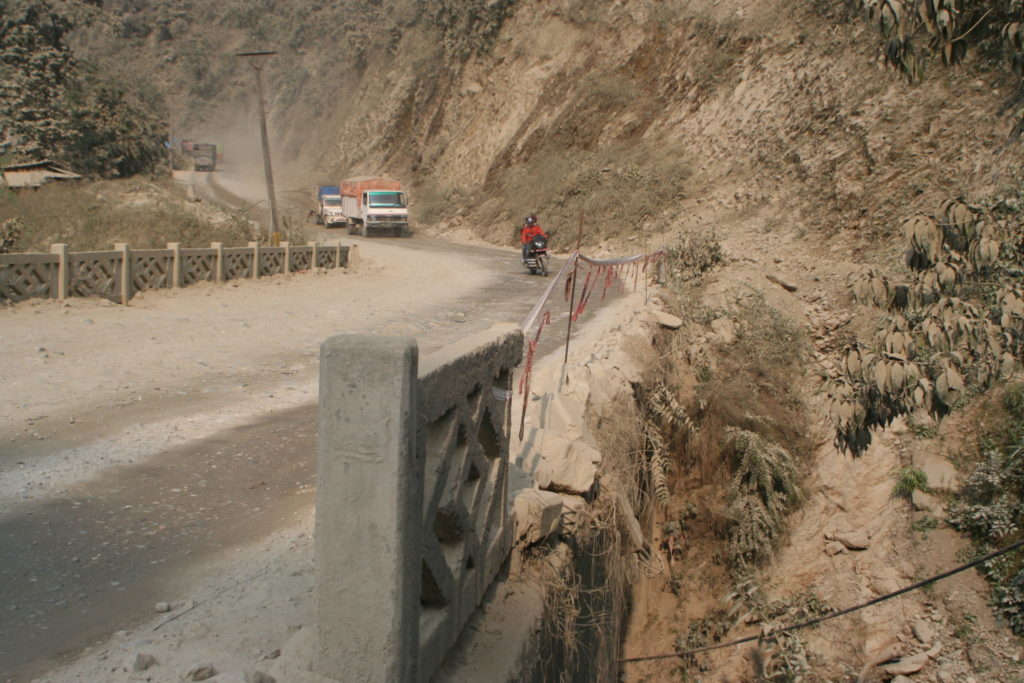 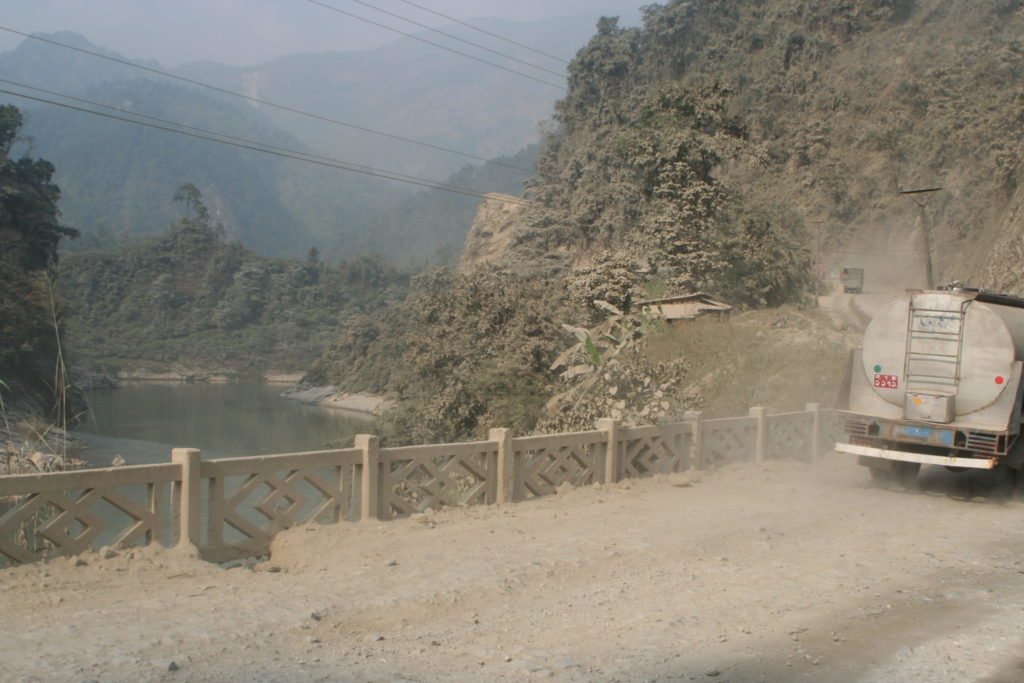 The surface of the road changed a lot,  from perfect asphalt, over asphalt with holes to no asphalt and just sand and rocks. It changed like every 500 meters to 2 km😂 Because of the trucks it was sometimes very dusty. When it got too dusty I just put my Buff over my mouth and nose,  to have some kind of protection😂 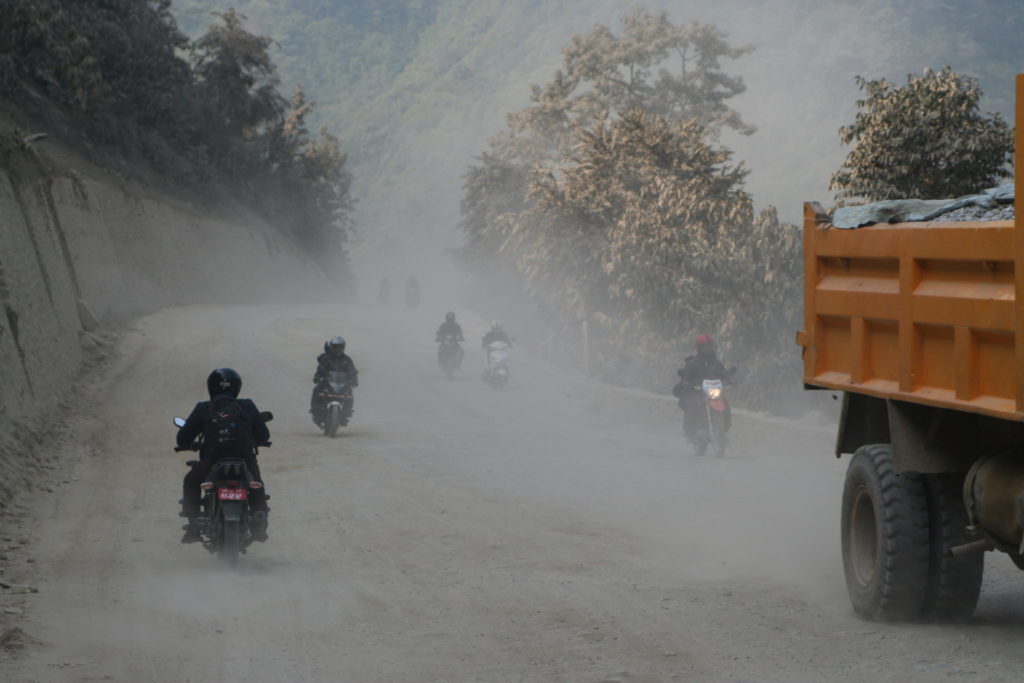 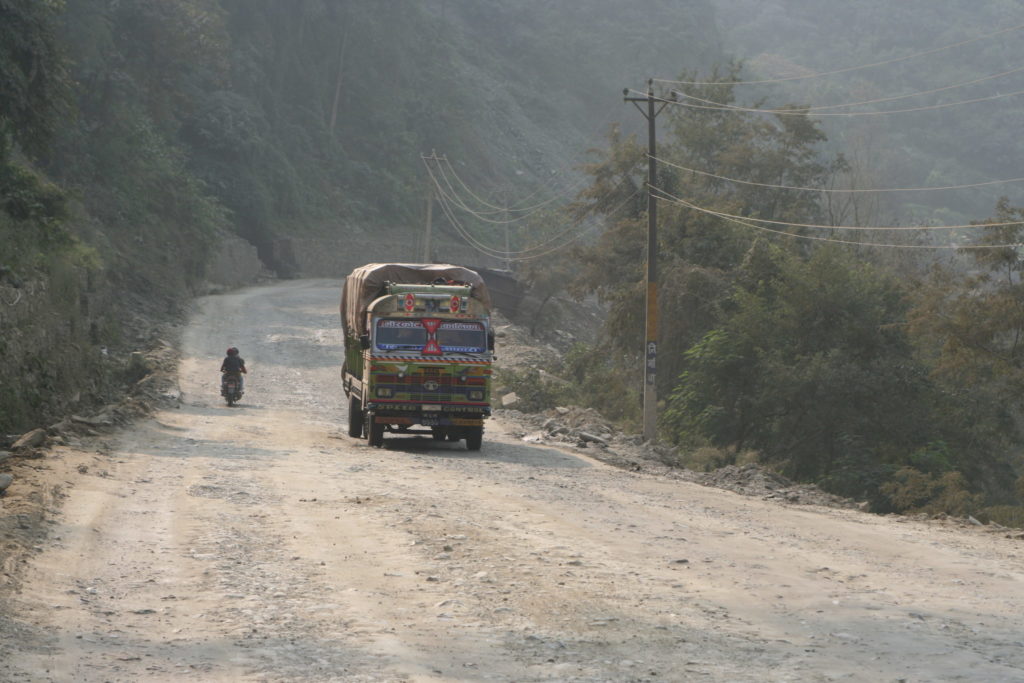 Suddenly there was a big line of vehicles waiting,  even the engines were turned off. I did as I always  do when there is a line,  i skip it. It was a really long lane,  probably 1 km long. Arrived at the beginning of the line, I saw the reason for the line. Rocks on the road as they demolished a wall which was dangerous so they explained me. 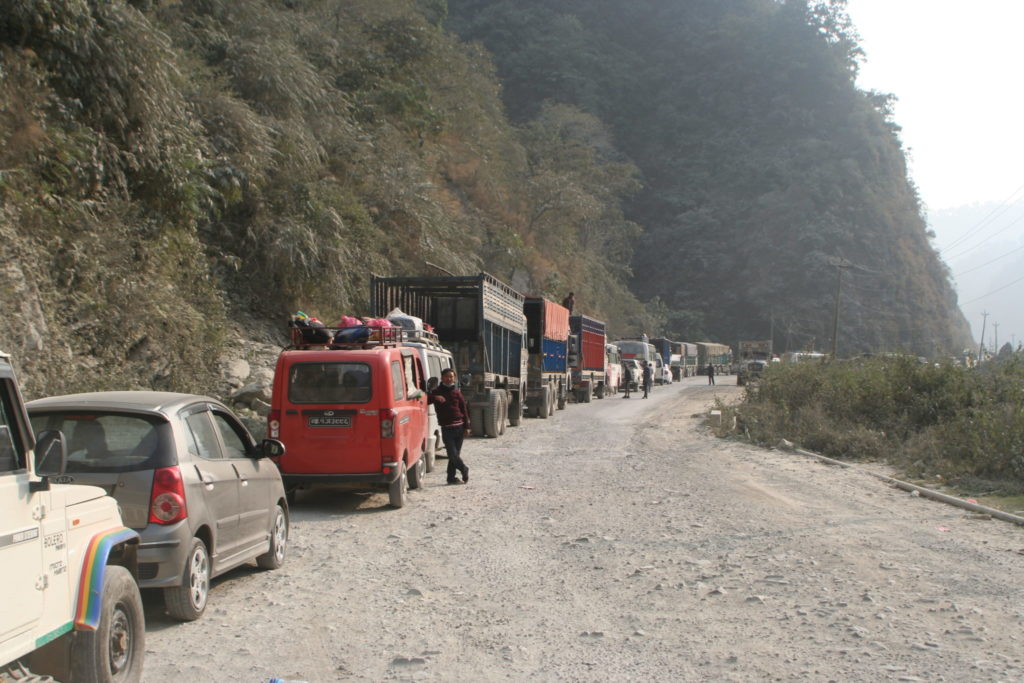 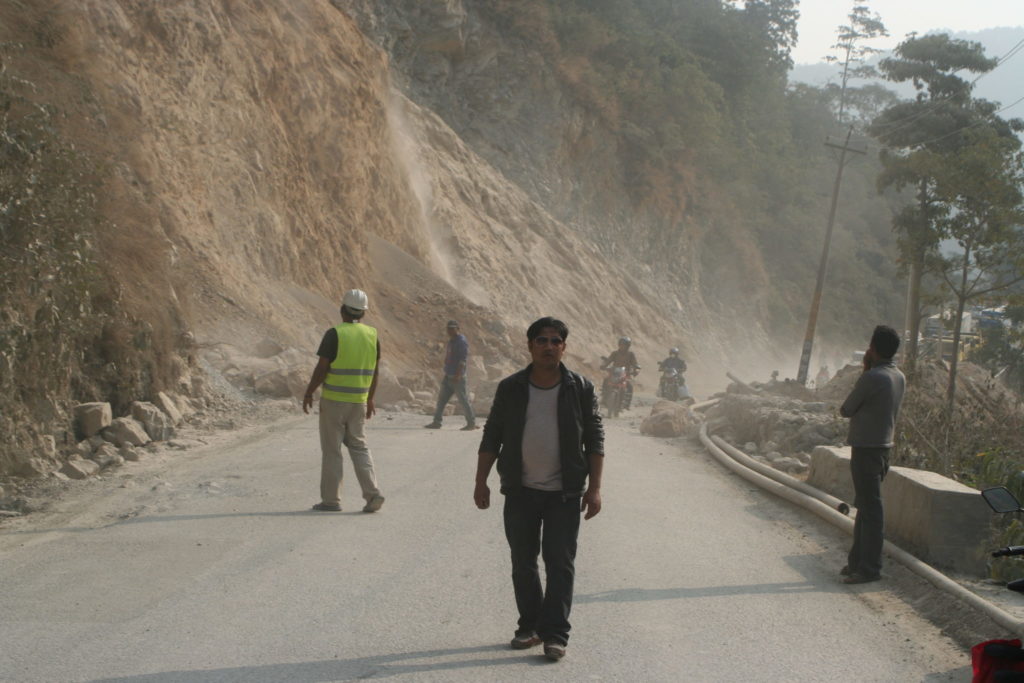 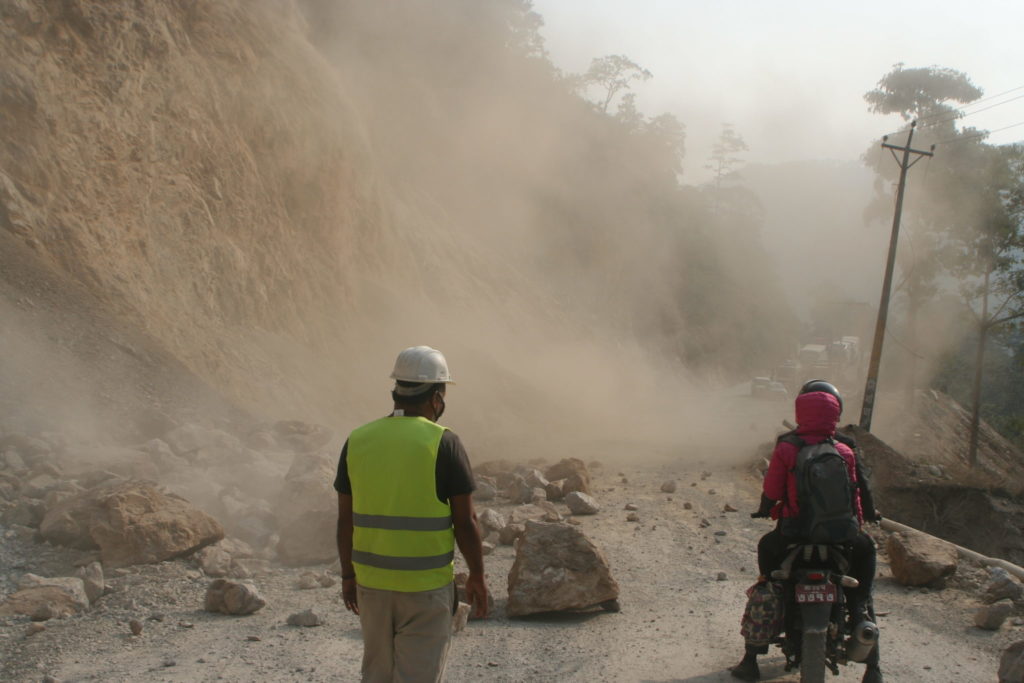 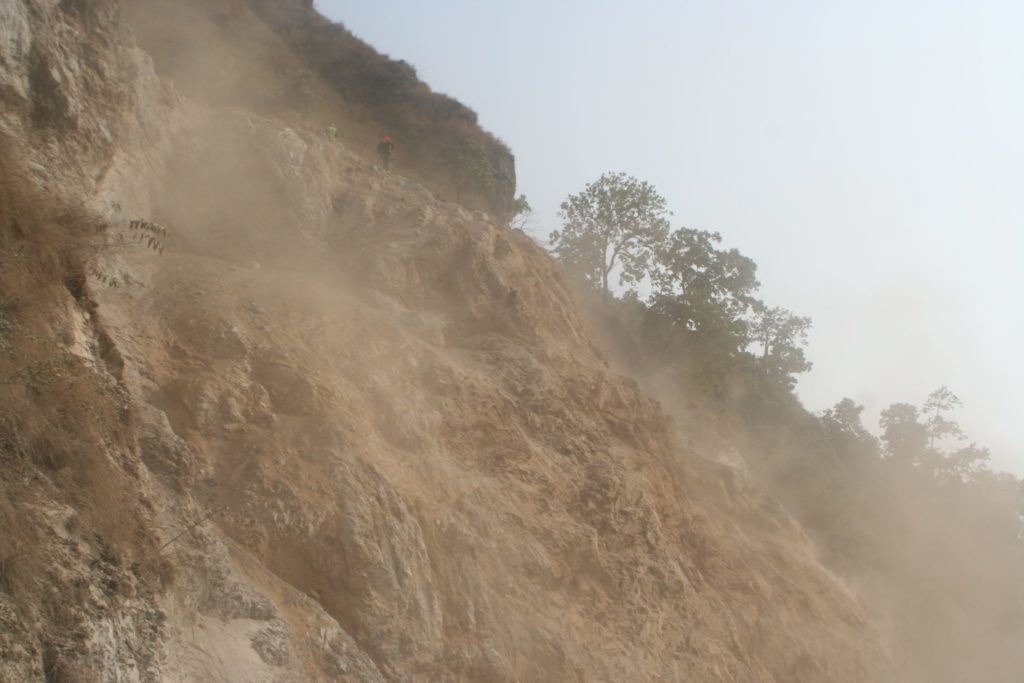 As Motorbikes and me as only cyclist could move around the rocks on the road when they stopped breaking them off,  we were allowed to go through.  Cars,  busses and trucks needed to wait for the bulldozer to clean the road. So after I passed the line of waiting vehicles on the other side (same length),  I had an empty road,  just some going in the opposite direction.

Soon I got into a city and traffic got normal again,  but the street was also perfect😀 Just like 15 km left till my lodge where I sleep tonight in the village  called Sauraha in the Chitwan National Park. 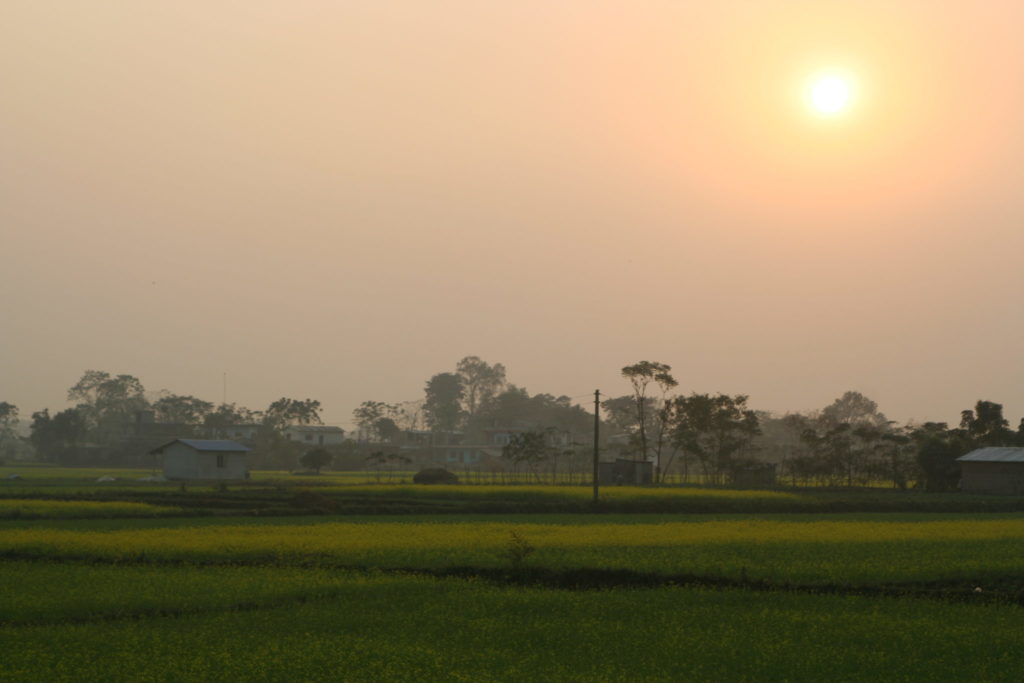 Because of all that dust either from the morning and the afternoon,  everything is dirty,  including my face (and no one told me). 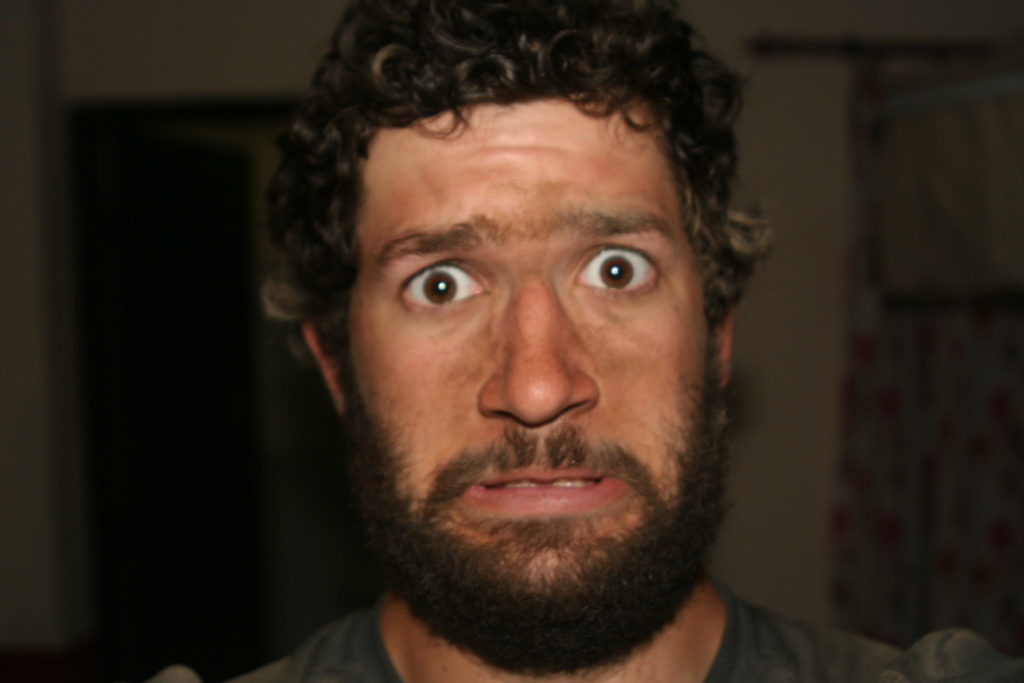 Now it is washed up and clean again. As for my cloth. My panniers and bike are still dirty perhaps I will clean them tomorrow

Also tomorrow I will stay here and do some safari on the back of an elephant and in a boat.