When I woke up this morning,  it was the first time I felt that my legs hurt a little bit. I was like: “this will be a horrible day”. I got up,  as I had to move anyway.

As every morning my routine:

As Waling is next to a river at the bottom of a valley,  it was foggy in the morning. It was cold,  wet and the view was not great. But my legs were fine again,  so I could start through. As soon as I stopped for whatever reason,  my glasses got foggy too.  After 2 hours of riding up and down, I finally came over the fog or it simply disappeared. I don’t know,  but i got off my long arms and it was nice to feel the sun☺️ 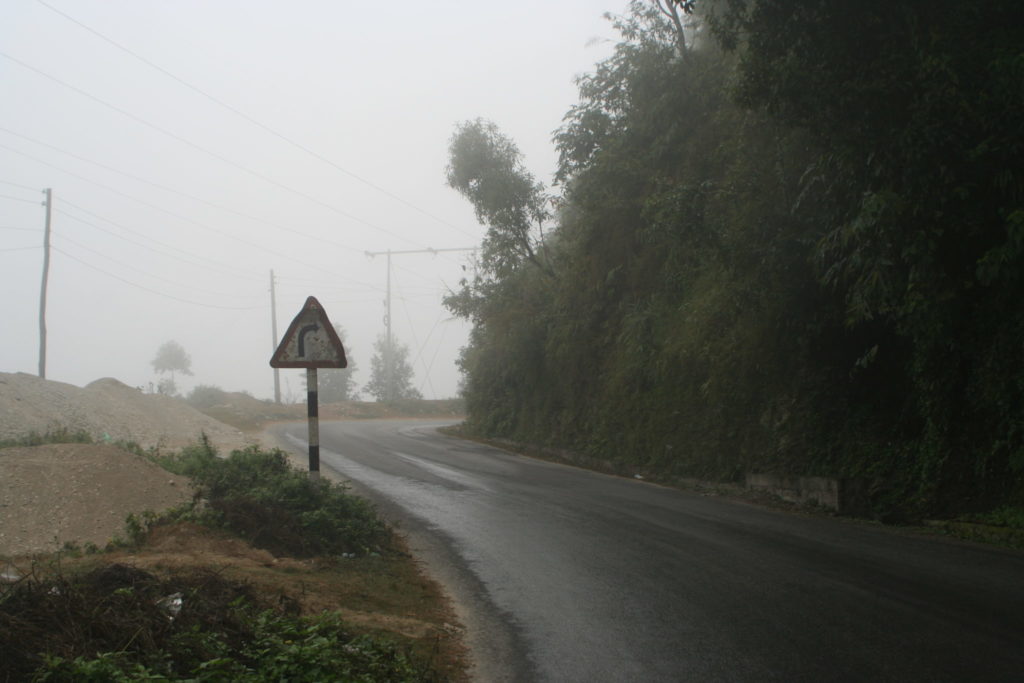 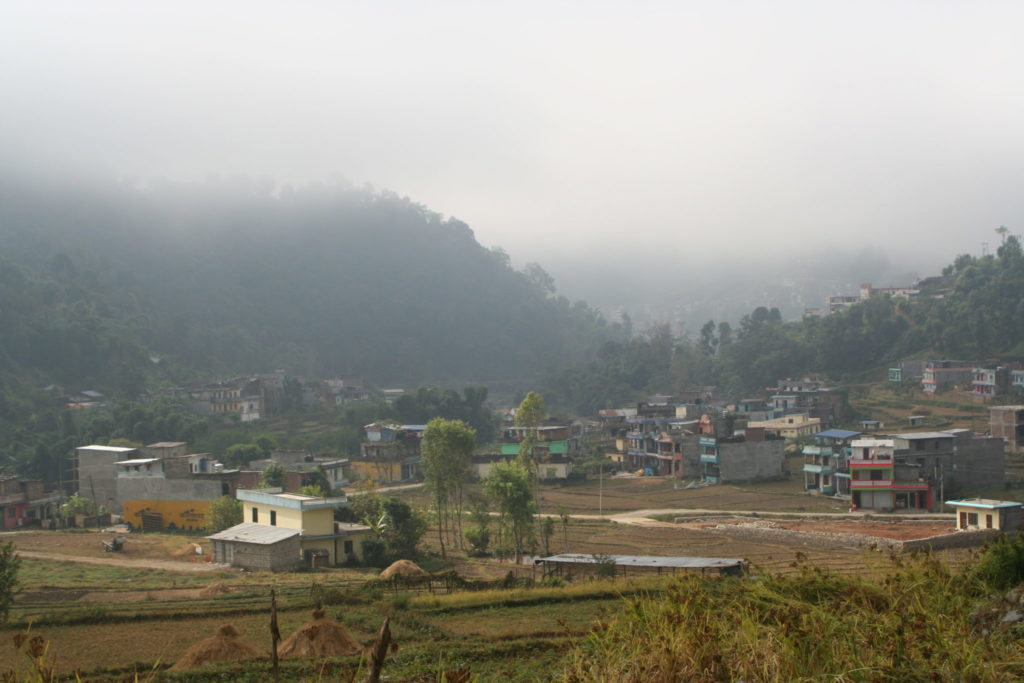 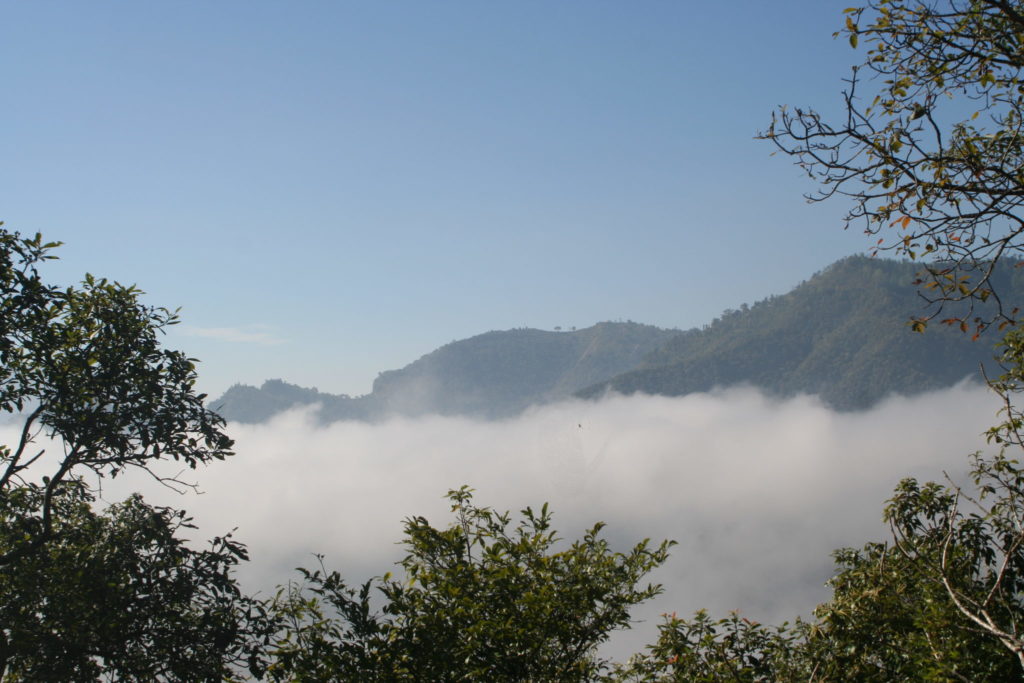 From now on, I always got glances to the snowy mountains behind Pokhara. Really nice. 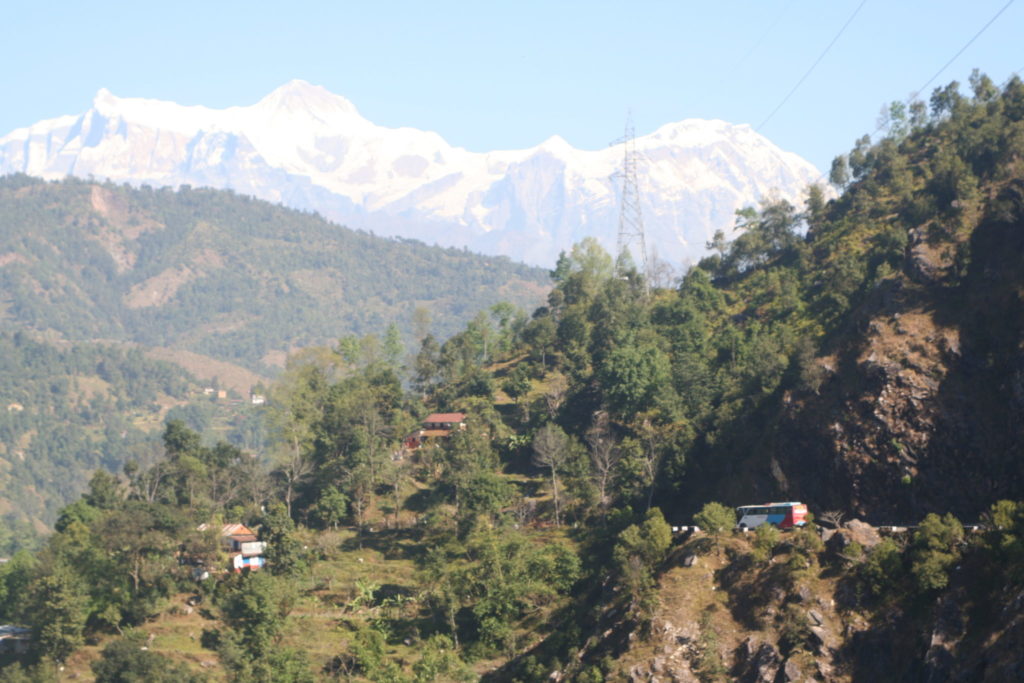 I was really impressed how fast and good I was coming forward. After 2 hours I’ve already did half of todays distance. It constantly went up for a while and then down again. The problem when going down is that my legs got cold again and it always hurt a little bit when I needed to start pedal again,  so I tried to keeps my legs moving while going down,  that helped. 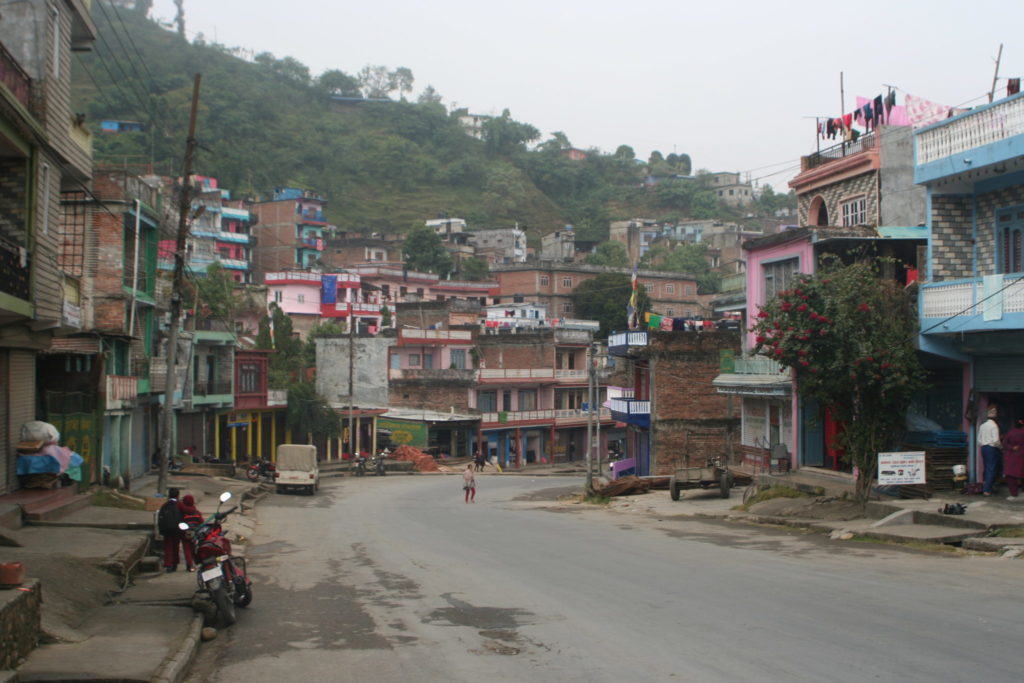 Around 12 o’clock I got the first glance of Pokhara. I decided to skip lunch for now and ride right into the city. So I did. First I wanted to get into a cheap hostel or guest house,  but then decided to go into a hotel,  for 1 or 2 days. 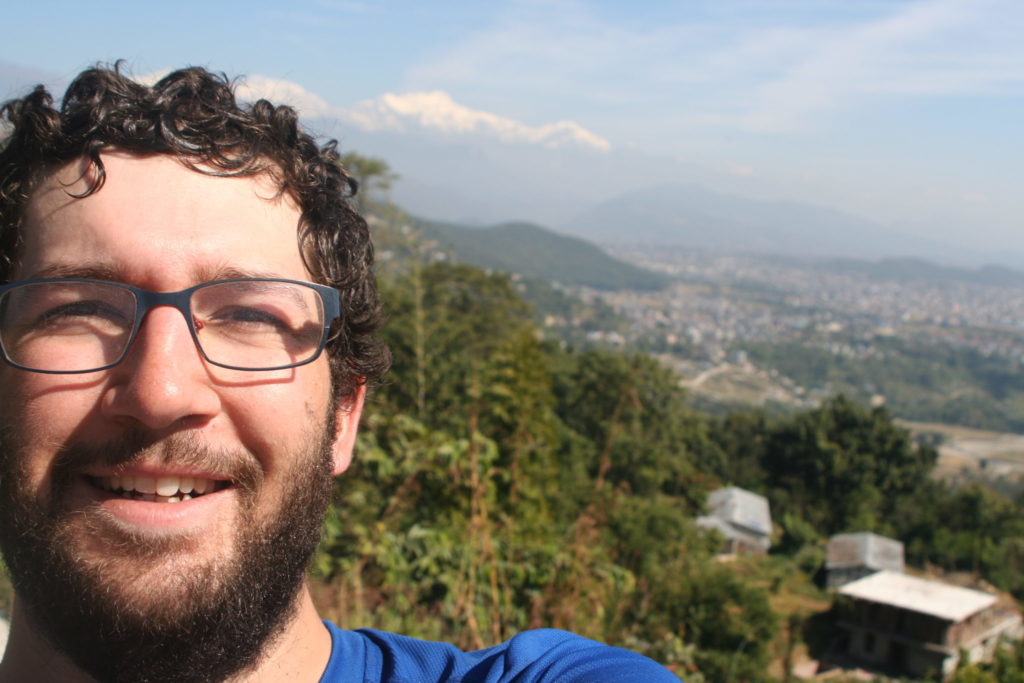 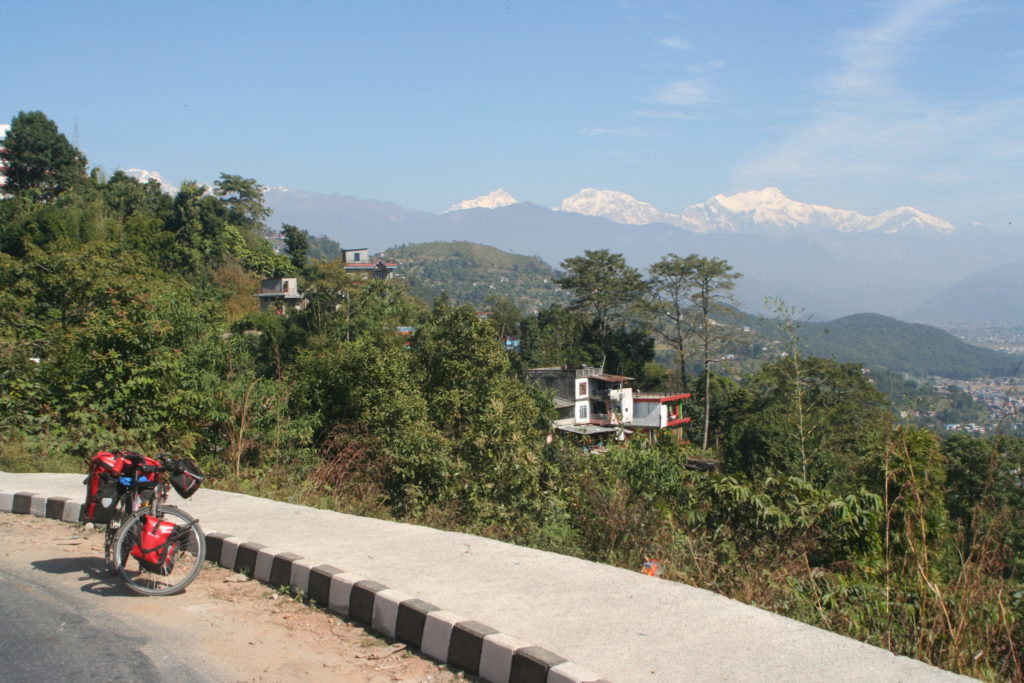 After eating chaomin as lunch, I went into the city center of the locals to get a cheap backpack. I didn’t have one, which was really annoying when walking in a city, as my handlebar-bag is not that useful to take with me. And the next days will be lots of different activities than cycling,  like hiking, paragliding or riding a motorcycle 😀

When I came back from the city center, which was a 45 min walk, it was already dark, so I went up to the roof of the hotel,  as Tomaz told me that the full moon will be very close and big,  which does not happen that often (so check out the moon tonight). On the roof I met another guest of the hotel,  Kim. He was also taking pictures. We chatted a little bit and found out that he is from belgium and worked in Luxembourg before he went travelling with his girlfriend Nathalie, who joined us soon on the roof. As no one of us had dinner yet, we went all together into the tourist part of Pokahra to eat. Along came another guest, Vicky from Australia. Arrived at OA2K a vegetarian (very good) restaurant, Carlos, the spanish cyclist I met 2 days ago on the road,  wrote me to meet up, so he joined us too. It was a lovely evening where we were all talking about our experiences of our travels. (That is actually the moon) 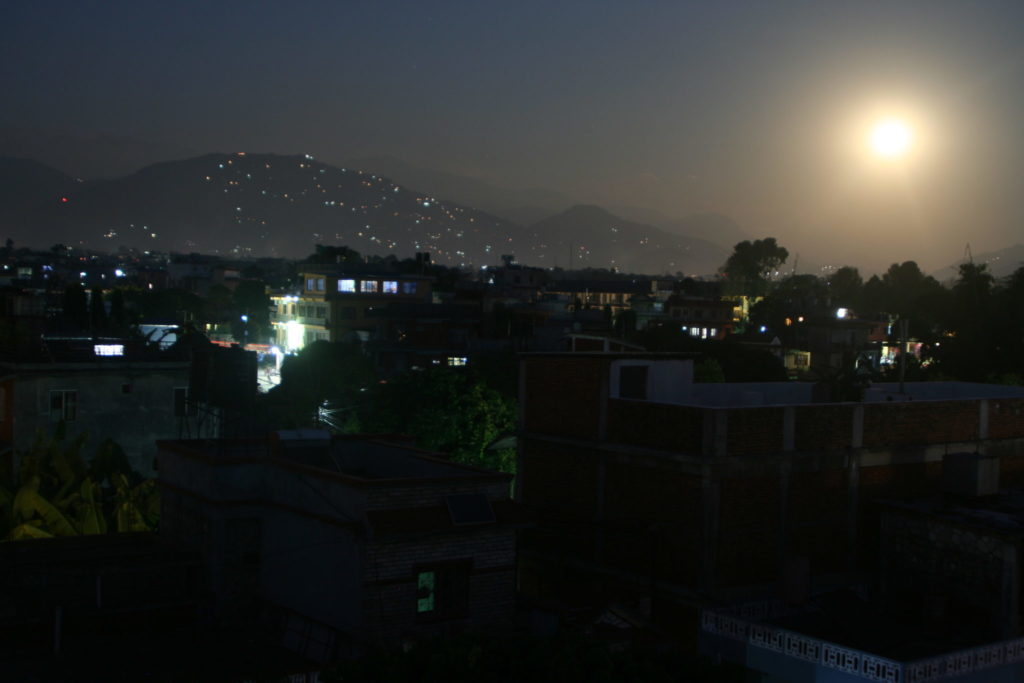 I am not yet sure what I will do tomorrow.

Few days ago, I met some people who told me,  that traffic here would be horrible. That was a lie,  traffic is higher than on the land but not unusual much,  after all it is a city. I am more annoyed fir all the tourists. But I will get used to them.